A Closer Look at Global’s Logo

If you look closely at the gold diving helmet in the center of the Global Diving & Salvage logo you might notice that there’s something missing. It’s a subtle, slight mistake that – 35 years ago – fit the vision original owners Thom Davis and John Graham had for the company.

The helmet in the logo is missing a wingnut and a stud. The company’s current President and CEO Devon Grennan has never gotten a straight answer on if that mistake was purposeful or not, but joked that maybe, “it just made sense not to have it because the guys themselves were a little bit of a loose nut themselves.”

At the time, the founders were mostly single guys leaving well-paying jobs to start a dive company without much startup capital. But, what they lacked in funding, they made up for with a long-term vision.

“I think that kind of entrepreneurship and that kind of belief in yourself sometimes looks like you’re crazy to the outside world and other times like you’re on the right track,” Grennan said. “I think they thought that the missing wingnut was a good reminder of that.”

So, while Grennan doesn’t know the exact origin of the wingnut omission, it fits the company’s humble beginnings – a tribute to a tradition that endures to this day.

Other aspects of the logo provide a peek into the history of the company and the industry. For instance, the helmet; Global was started at a time when people were transitioning from the heavier helmet pictured (a Mark V) in the logo to a lighter, fiberglass one.

So, why did Davis and Graham want to showcase an older helmet? In addition to paying homage to the history of diving, “they wanted something that was bold and recognizable,” Grennan said.

Just under the helmet in the logo, there is a thick black line, tracing above the blue waves below. That line symbolizes oil.

“Back in those days there were a lot more oil spills to respond to,” Grennan said. “Responding to an actual marine oil spill was a pretty common event back in the late ’70s, early ’80s. They wanted to nod to the fact that they did oil spill clean up as well, which is why they have the black wave line above the blue water.”

Completing the logo are latitude and longitude lines, forming the frame of a globe that circles the rest of the image. While the company had humble beginnings, adding “global” to both the name and imagery was a testament to the bold vision of what the founders’ believed the company could create.

“We are very fortunate that they didn’t call themselves Seattle Diving, Harbor Island Diving, or Puget Sound Diving because we would have had to change the name a long time ago,” Grennan said.

Looking back on that original image, only one thing has changed throughout the company’s 35 years. Where it used to read: Global Diving & Salvage, Inc., only one word remains – Global. The company has grown over the years, but Global remains true to its roots.

“That fact that the logo is in a globe shows we are not confined by specific region or area and we will go where the work is, but it reminds us and our clients we have that go-anywhere attitude to take care of business,” Grennan said. “We still want to tie back into who we are, where we came from and where our roots are in both commercial diving and the fact that the water is there and the oil on top of it recognizes or gives precedence to the marine services that we do in addition to commercial diving.”

Everything about Global’s logo is intentional, from what was included to what was left out, and it continues to be a point of pride for past and current employees. “It really set the vision for the company 35 years ago, one we have been able to realize,” Grennan said. “Our employees take pride in working for a company with strong roots. We are a company that can and does respond globally.” 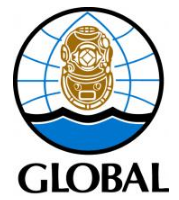 One thought on “A Closer Look at Global’s Logo”