The work we do at Global requires us to be prepared for just about everything, so our employees regularly undergo safety training including water rescues, first aid and CPR. The training certainly paid off the morning of August 13th when two of our Environmental Technicians, Carl Anderson and Caleb Faires, helped rescue two workers that had fallen into the Duwamish Waterway at the Port of Seattle.

Anderson and Faires were in a small landing craft hauling floating boom for a petroleum transfer at Terminal 18 when they heard and saw several people across the channel at Terminal 30 hailing them. The Global crew stopped their booming and headed across the waterway to assist with the situation. As they approached the other dock they saw a man swimming in the water with a life ring, holding onto an unconscious man. The victim had apparently fallen from one of the large container ships at the terminal; the second man was an operations manager at T-18 who saw the victim in the water and jumped in to help. The water temperature in the Duwamish remains near 55 degrees year round, and the rescuer was in danger of succumbing to exhaustion and hypothermia.

The Enviro Team lowered the ramp at the front of the landing craft and pulled the two men into the boat. They rolled the unconscious man onto his side to help remove water from the victim’s lungs; the victim’s vitals were faint but he was breathing and had a pulse. A crane operator at T-18 was able to lower a man basket next to the boat and paramedics helped get the men from the boat into the basket. The operations manager was treated at the scene; the unconscious man was transported to Harborview Medical Center in critical condition.

Anderson and Faires said they were simply in the right place at the right time, and were glad they could help with the rescue. “I’m so glad we’ve had the CPR class; you never know when something like this could happen. We knew what to do and we helped the victim out until the firefighters could get there.” 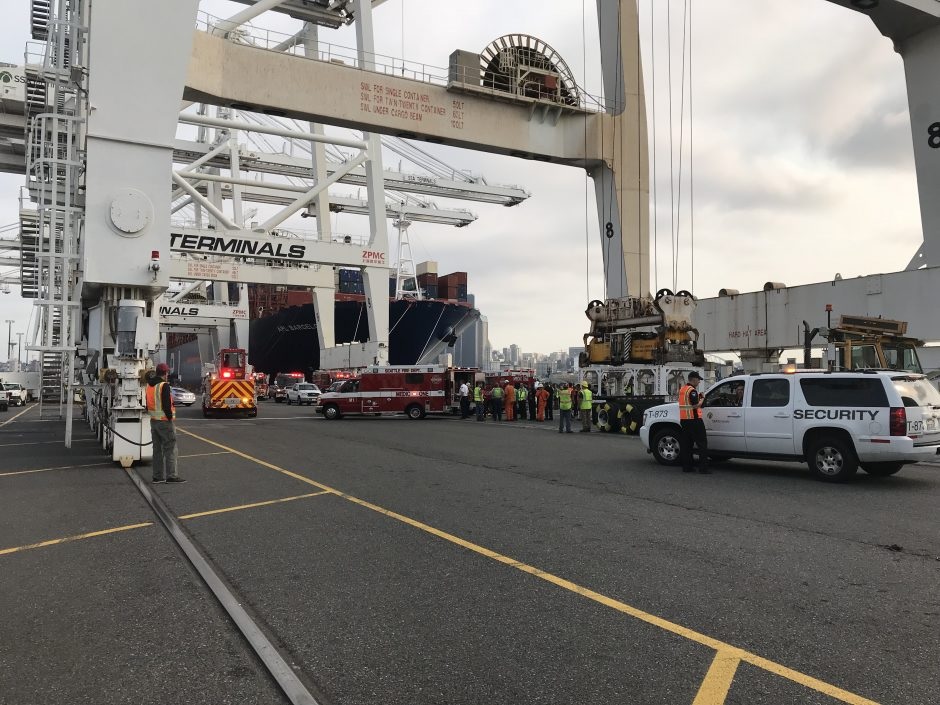