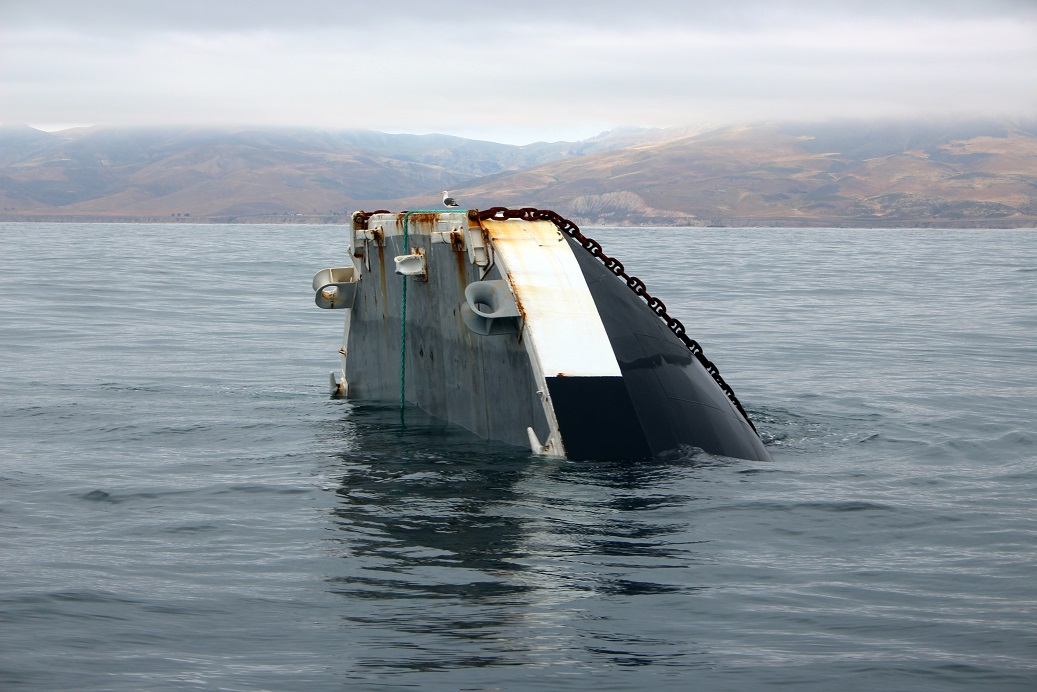 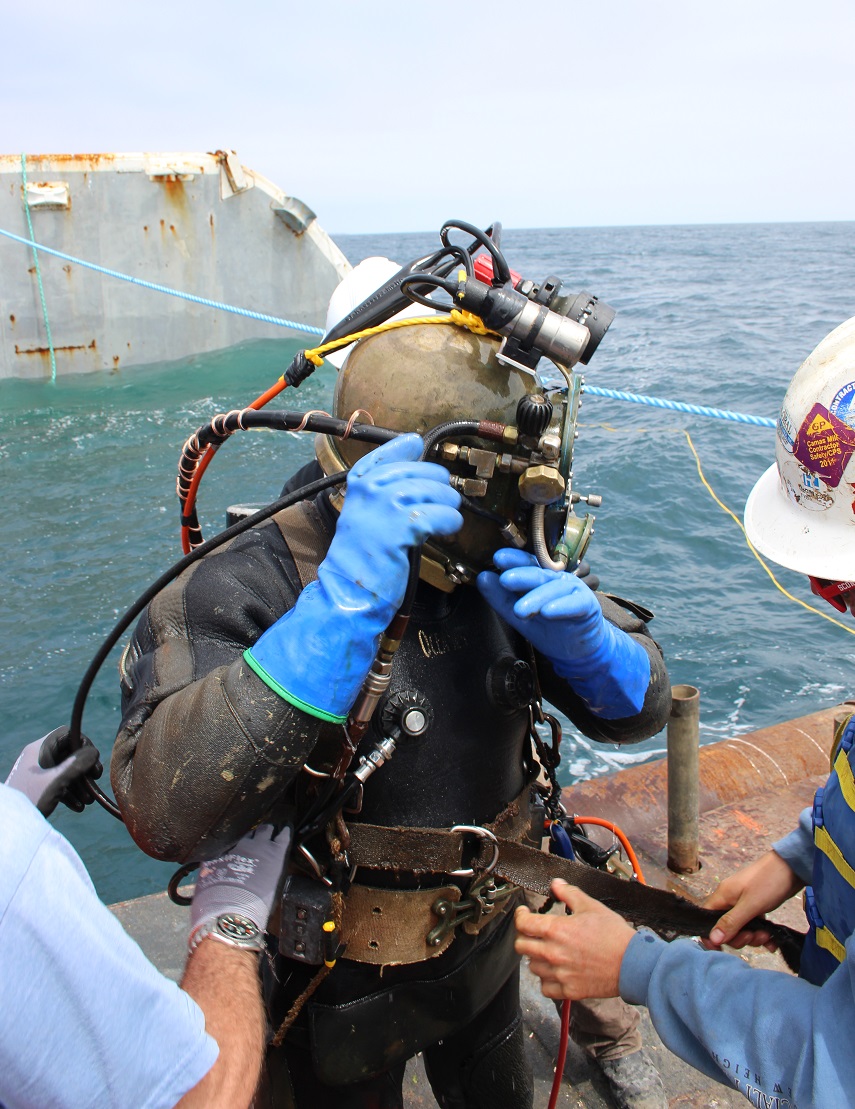 A Tall Order – The Scuttle of the Nash

Global Diving & Salvage, Inc. responds to emergencies worldwide. Although no two marine casualties are ever exactly alike, most have the same goal – to get a distressed vessel out of the water or back to sailing, one way or another. However, the Nash was one that turned convention on its head, in more ways than one.

In June 2014, the 260-foot long barge Nash was being towed from Mexico to Canada. It held a cargo of magnesium chloride, a non-hazardous derivative of seawater. The barge began taking on water just off the coast of Santa Barbara, CA. Water began entering the Nash at the stern, causing the rear of the vessel to sink. Because magnesium chloride is a very dense liquid, much heavier than water, the cargo tanks had been left partially empty when the cargo was loaded to aid with the buoyancy of the barge. As the barge took on water, the forward cargo tanks stayed intact and contained enough air to prevent the nose of the barge from sinking.

When the barge finally came to rest, it was “aground” vertically. Its stern was embedded in the sandy sea floor, while the bow of the boat remained out of the water at a 90-degree angle, 235-feet above. “When a vessel sinks, it sinks. It goes to the bottom. If it capsizes, it rolls over. I don’t even know what you call what happened to that barge,” said Global Salvage Officer Kyle Watson.

The barge’s owner called Global directly for help with the sunken vessel. The Nash was extremely unstable while in its vertical position, and the vessel was situated close to two highly sensitive areas. A half-mile in one direction was an active oil and gas pipeline, and a half-mile in the other direction was a protected marine area. If the barge shifted one way or the other, the results could be devastating.

Within 48 hours from initial contact, a Global team was on-site to assess the situation. Their objective was to remove the barge from the area as quickly as possible, but the ship’s depth and its awkward position in the water made the Nash far more challenging than the average salvage operation. “It was a pretty unique situation,” said Watson. “I think that was the complexity for me, looking at a new creature, figuring out how to dissect it, and coming up with a plan that had never been done before.”

The vessel needed to be moved, but determining the best method for removal was challenging without knowing how badly the hull and cargo tanks were damaged. An investigative dive was too risky due to the instability of the Nash, and setting up deep diving equipment can be a lengthy process. Instead of a diver, Global sent a remotely operated vehicle (ROV) to the ocean floor to become the eyes of the operation. Video from the ROV revealed that the Nash imploded as it sank. As the stern sank deeper, the pressure difference between the seawater on the outside of the barge and the air on the inside of the cargo tanks caused the aft tanks to implode, leading to catastrophic failure of the hull. “It became pretty clear that refloating the barge in its entirety was not an option,” said Watson.

Since the rake and two cargo tanks were still intact, Global lightered product off of the barge in order to reduce weight. Then they introduced air to the intact tanks, which helped remove water and add buoyancy. “We had to be careful doing that to make sure we didn’t over-pressurize any tanks,” Watson said. “We basically introduced enough air into the barge to get it where the stern was no longer sitting on the sea floor.”

Global stationed an ROV on the ocean floor to provide a live video feed to monitor the Nash’s upward progress, and a high horsepower tugboat maneuvered in place to prepare for towing. Once the barge was floating enough to break free of the sandy bottom, the tugboat pulled the barge safely away from the pipeline and marine area and further out to sea. The initial objective of moving the Nash had been achieved, but Global now needed to figure out what to do with the damaged barge. “There’s no port in the United States that can accommodate something that’s drafting 215 feet. That’s a very tall order,” said Watson. “The idea of taking it somewhere for repairs, salvage, or recycling was really not an option.”

As an alternative, Global called the Environmental Protection Agency for emergency permission to legally dump Nash. After hearing about the situation and determining there were no hazardous materials onboard the barge, the EPA issued a permit to Global and provided coordinates for a safe dumping site 12 miles away from the original wreck area.

With the Nash still in a vertical orientation, the barge was towed to her final destination. Facing unpredictable weather, 10-foot seas, and travelling across shipping lanes at just one knot, the 12-mile trip took 14 hours. Once the Nash had reached the EPA’s dumping ground, she was scuttled and came to rest 2,600 feet below the ocean surface. “That was the first time in my career that we’d done anything quite like that,” said Watson. “I know Global has scuttled vessels with
more planning involved, but to my knowledge this was the first time we had done that in an emergency.”

From the time Global received an initial call from the owner to when Global demobilized from the job, only 11 days had passed. “The complexity surrounding this and how quickly we accomplished it is pretty amazing,” Watson said. “It’s a big undertaking for that short of a time frame.”

The job was unusual on many levels, including who was in charge. The barge owner asked the salvage company to represent them in the unified command – a position typically held by the Coast Guard. In this case, Global was the incident commander, leading the effort with oversight from the Coast Guard, state and federal agencies, and stakeholders. If there was a communication breakdown at any point during the project, one of those agencies could have taken charge, but the need never arose.

“The thing that I take away is the trust the industry and the agencies had in Global,” said Global Project Manager Kerry Walsh. “They put us in a role that is not typically given to salvors. We did it and we did it right.” At the end of it all, the Nash salvage project is one Global employees are extremely proud of. “It wasn’t easy by any stretch,” said Walsh, “but given the circumstances it was as efficient, safe, and cleanly done as you can possibly get.”