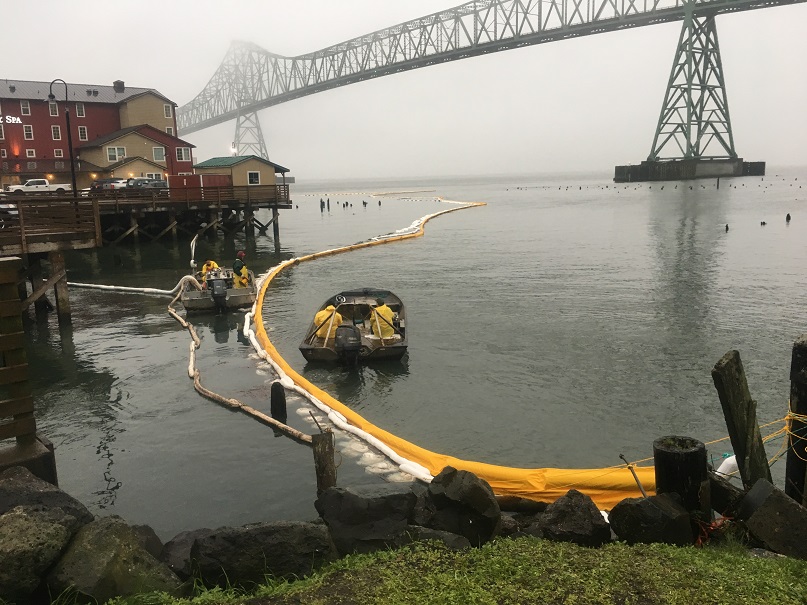 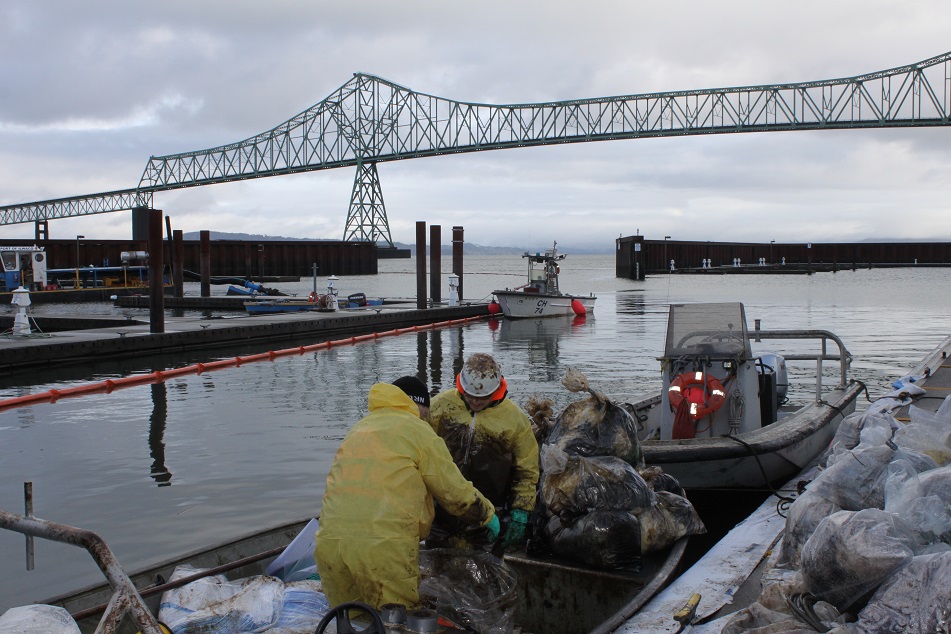 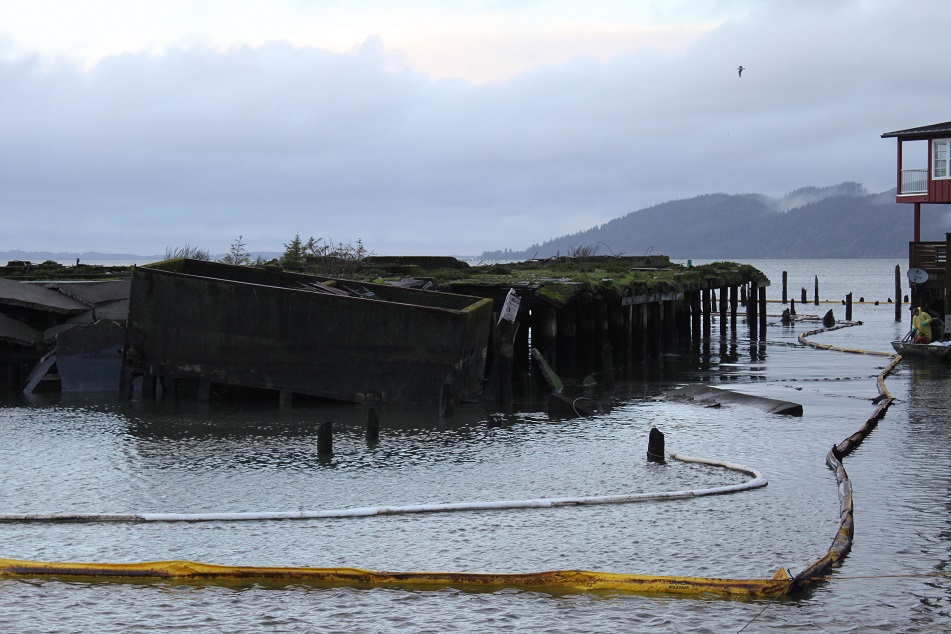 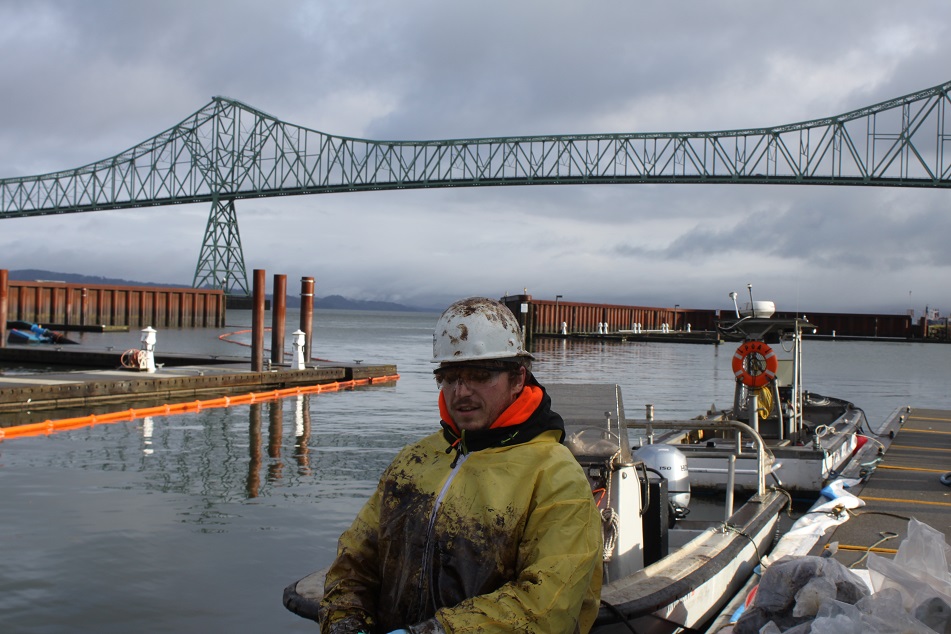 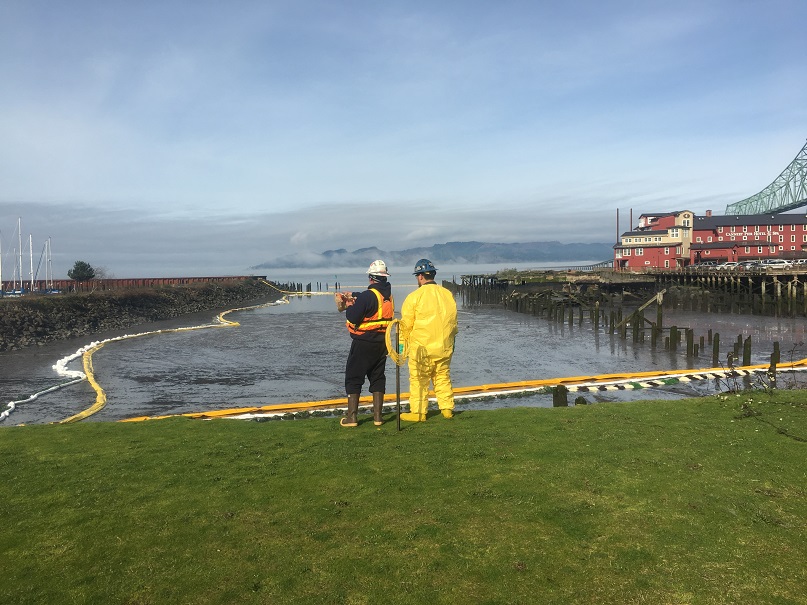 In late January 2018 at the site of an old cannery in Astoria, OR, a 5,000 gallon tank holding bunker C heavy fuel oil ruptured when the dilapidated pier above it collapsed during a storm. The US Coast Guard was notified of the oil in the water, and contracted Global for the spill response; initially the main concern was containing the spill and preventing it from traveling up the Columbia River. Global immediately responded with a team of environmental technicians and divers, assisted by workers from the Tongue Point Job Corps. Crews deployed two layers of hard containment boom around the area; one long length of boom enclosed the entire area surrounding the marina, seawall, and cannery up onto shore, and a shorter length of boom was used within that to encircle the pier containing the leaking tank. Spill cleanup efforts began; sorbents were deployed and a skimmer was used within the boomed off area to remove as much oil as possible. Crews were initially working around the clock to deploy boom and sorbents, running the skimmer, adjusting boom that became hung up on the pilings during high tide, and double-bagging used sorbents for proper disposal.

Although the crew’s initial spill cleanup efforts were successful, more oil was released from the tank with every tide cycle, repeatedly fouling the area; it was quickly determined that the oil tank would need to be removed. A crane barge was brought in, and divers rigged the tank for removal. The tank was lifted out and placed in containment; more than 2,000 gallons of bunker C oil was collected. With the source of the oil removed, crews used the crane barge to lift out the inner and outer layers of contaminated boom and place it into lined dumpsters for proper disposal. The team redeployed two layers of clean boom, again going from the seawall to land with the outer layer, and lined the basin between the cannery pier and the marina with the inner layer. Once containment boom was in place, the outer and inner layers were lined with sausage boom and snare (pompoms) to collect oil released from the rip rap and piles during tide cycles. During booming operations, a second crew used sprayers to remove oil from the marina walls and piles. Crews continued to monitor the site for two weeks, replacing sorbents and snare as needed until officials determined the spill area was clear. Global’s environmental technicians collected and bagged the remaining sorbents for proper disposal; the containment boom was retrieved and decontaminated for future reuse.

“The re-release of the bunker C oil with every tide cycle was the biggest challenge,” said Scott Hynd, Global Environmental Operations Manager. “Every time the crews would get it cleaned up the tide would come in and release more oil. It was also very windy and rainy, and that makes any operation more difficult. Once we got the tank removed, everything started moving forward and our team got the situation resolved quickly.”