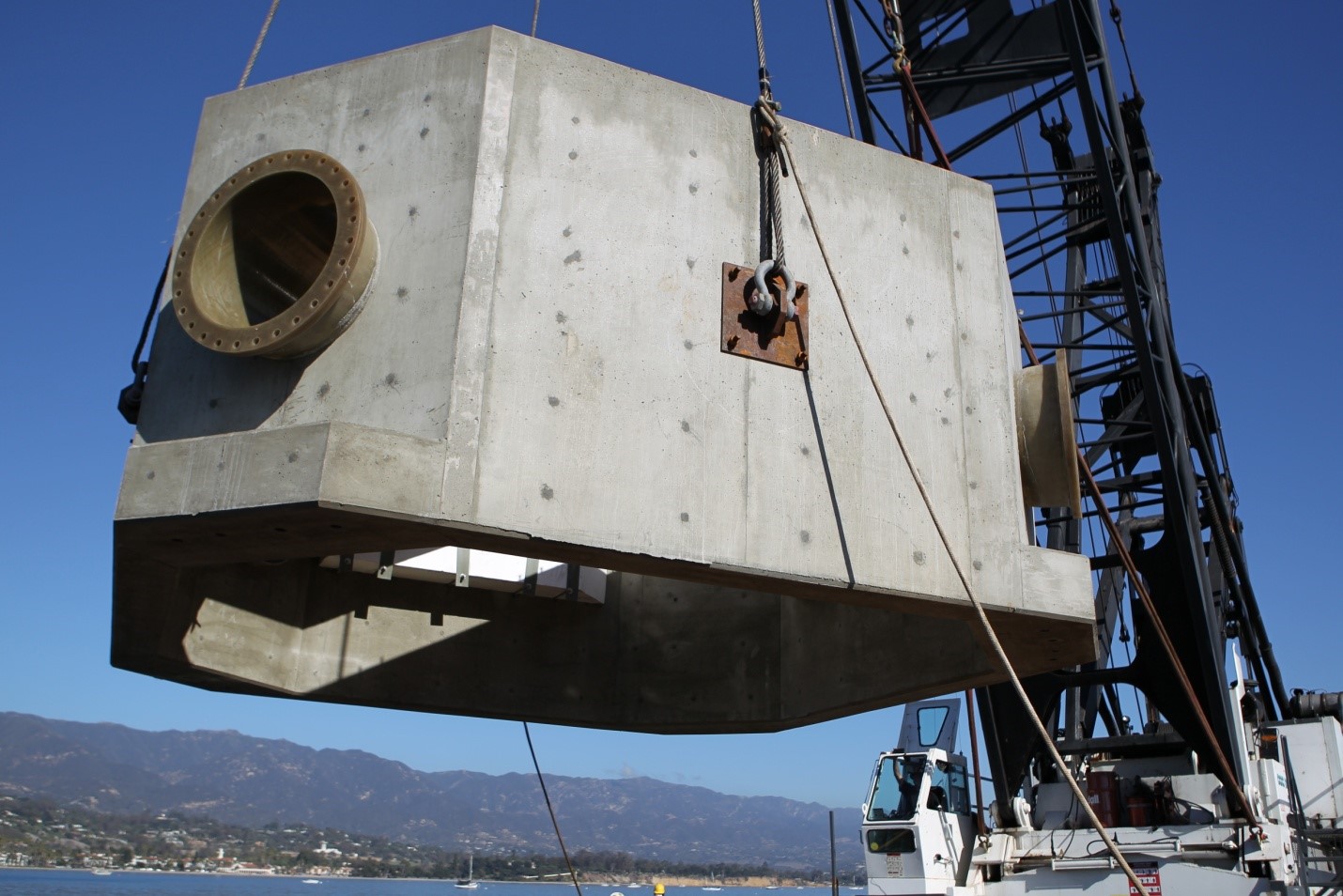 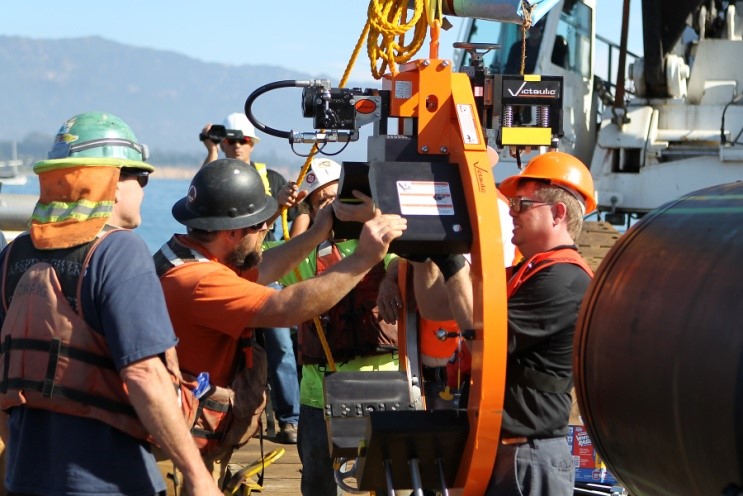 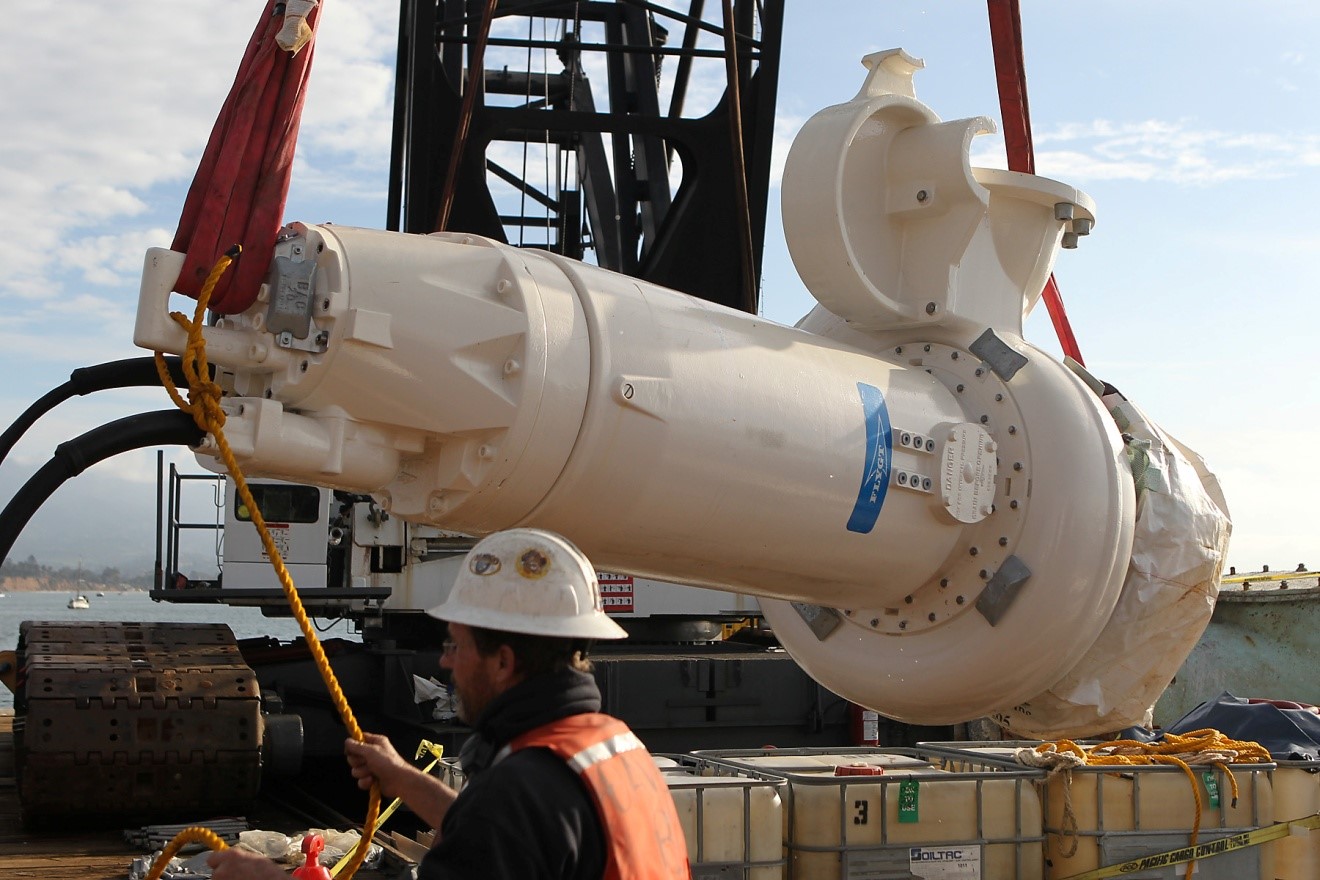 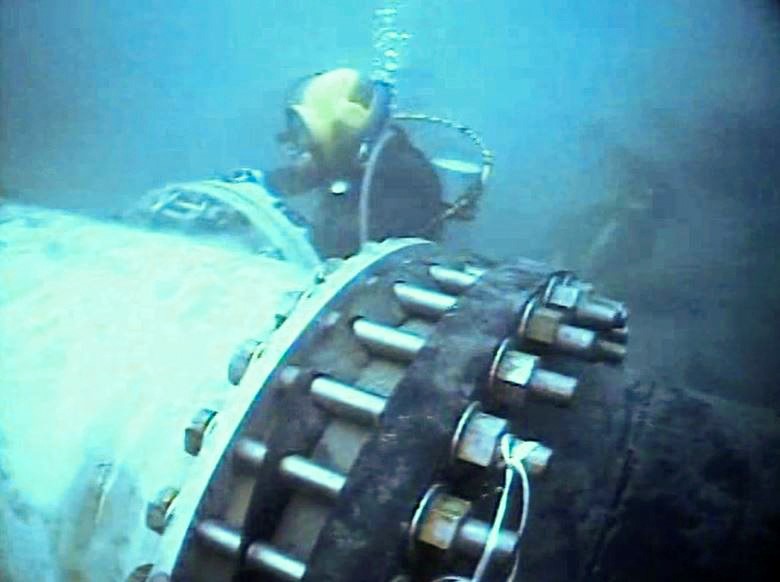 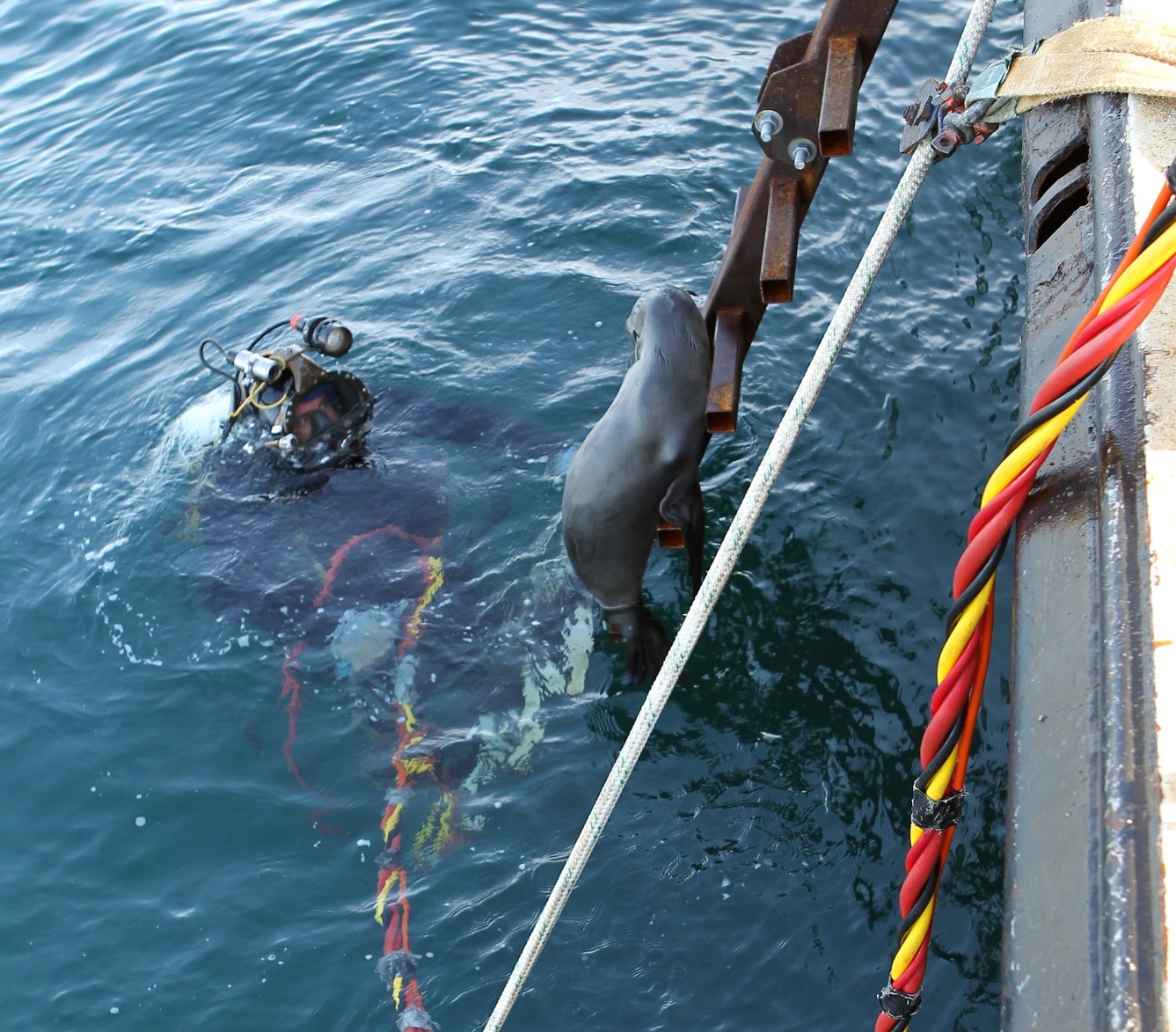 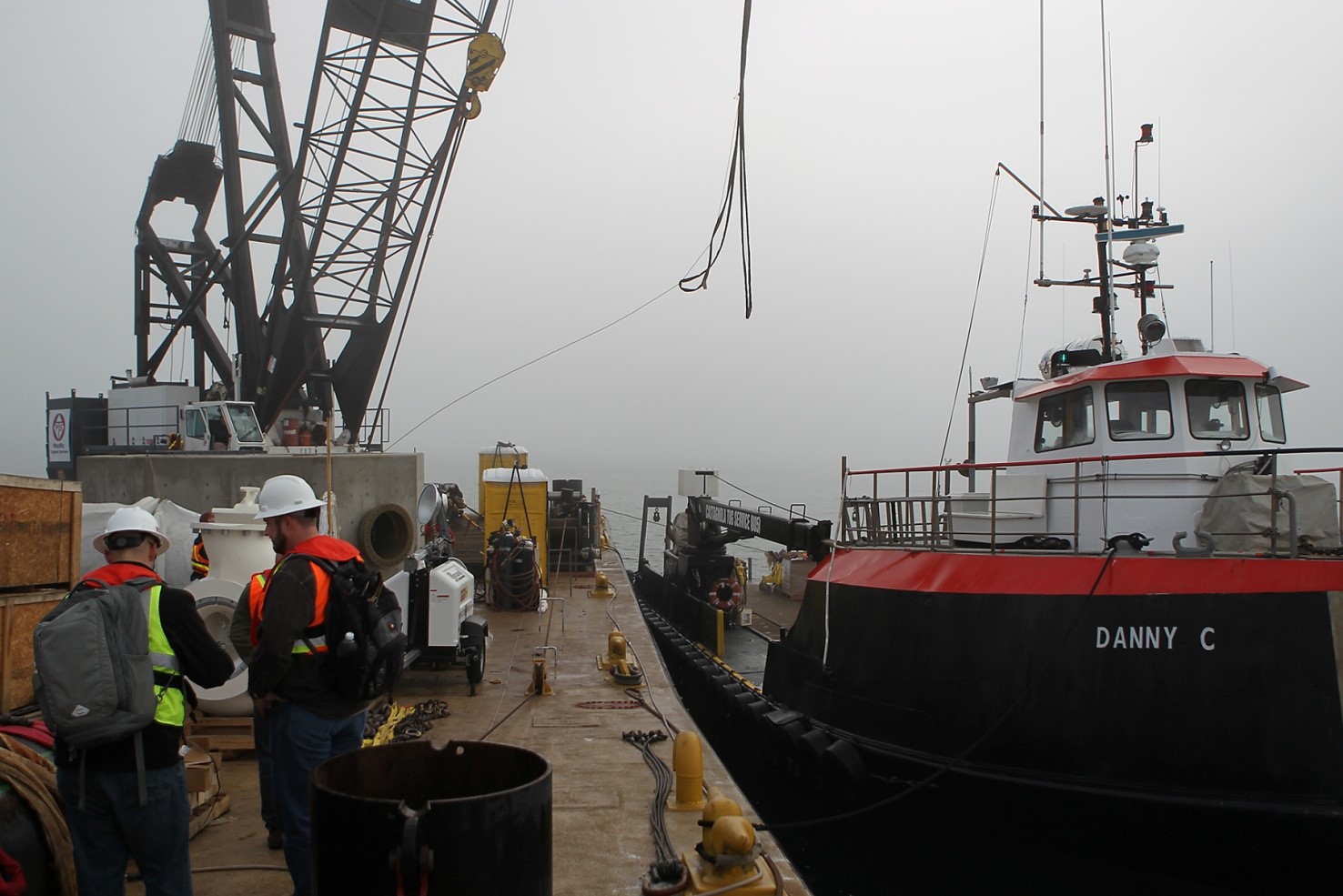 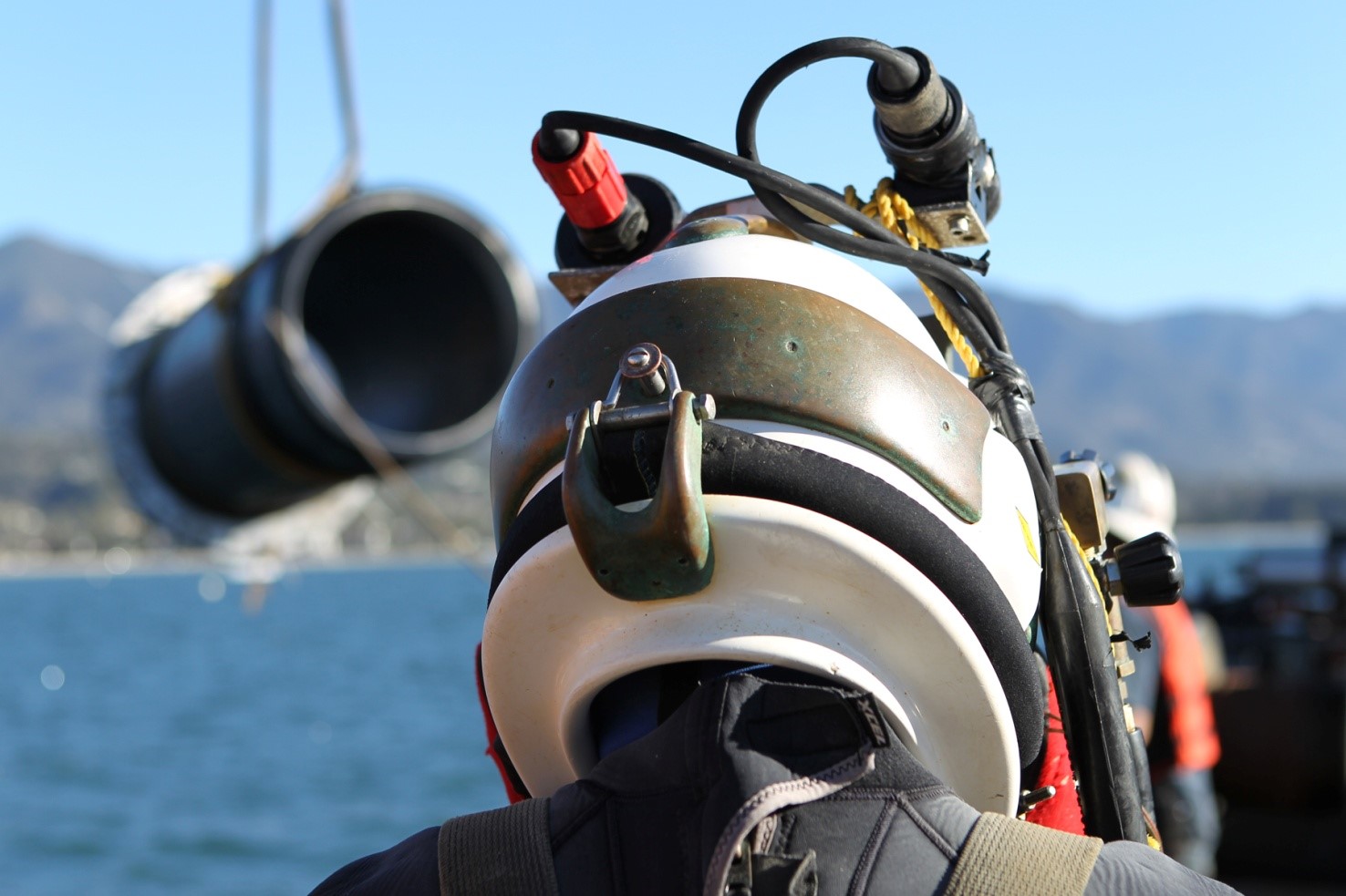 In response to a prolonged drought and water crisis in the late 1980’s, the City of Santa Barbara constructed a seawater desalination plant that came online in the summer of 1992. After operating only a couple of months, it was shut down and placed in “standby mode” due to a large amount of rainfall that winter.

With the region experiencing another prolonged drought, in 2015 it was decided to reactivate the desalination plant and expand the capacity using updated technology not available in the early 1990’s. Unfortunately, possibly due to the fast track construction schedule for the original system, detailed as-builts (particularly in regard to the offshore intakes) were not available, and many components had been removed when the plant was place in standby. Because of this, the project was characterized as a “design-build”.

Global was contracted by Kiewit Infrastructure West to mobilize a derrick barge and dive crew to set large concrete top packages over the two open intake structures, install two connecting spool pieces to the intake pipeline running 2500 feet to the beach, pull new power cables through the pipeline from the shore, and perform other miscellaneous tasks. The work was estimated to take less than two weeks to complete.

Global was tasked with performing an initial 3-4 day inspection to obtain measurements and confirm existing conditions at the pipe termination and two concrete intake structures. Working from the Danny C, a Santa Barbara based workboat; the crew found that the location where an offshore transition section split the pump power cables to the intakes was completely encased in a formed concrete pour. In addition, steel pipe spools left encased in the concrete structures had suffered heavy corrosion and needed to be replaced. Two other FRP “Y” pipe sections that were to branch off the intake structure connecting pipe sections were determined by the engineers to need replacement.

The dive crew worked for weeks at the transition section, exposing the steel formwork by hand jetting/dredging, burning the form away, and removing the concrete and steel reinforcing from the encased FRP fitting using chippers, drills, and a hydraulic concrete splitter. The engineers wanted to preserve the fitting for design evaluation and original dimensions, so the demolition was done carefully to recover the fitting intact. After removal of the two “Y” sections and the transition piece, video documentation and measurements were taken of the existing concrete intake structures for construction of the new top packages.

The DB San Diego with dive crew and equipment was mobilized from Long Beach, and set up on a four point anchor spread at the desalination plant intake structure. The two concrete top structures, each weighing 90,000 pounds, were staged on deck. These structures would have to be placed on the top of the existing intakes with enough precision to line up sixteen corresponding 2” diameter bolt holes, after which large intake pumps would have to be lowered through a narrow slot at the top of the concrete structure.

Other notable tasks performed by Global included the first ever underwater installation of an HDPE Victaulic coupling of two 42” sections of pipe, which required precise milling of several grooves on each side of the pipe to allow a leak proof coupling. Global worked with the Victaulic Corporation closely to ensure the rotating hydraulic milling tool was adapted for safe and effective use underwater by divers. Victaulic sent a technical team to offshore to document the procedure.