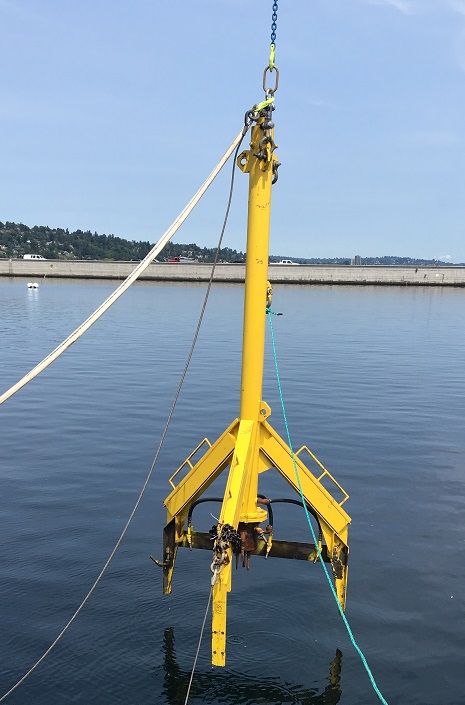 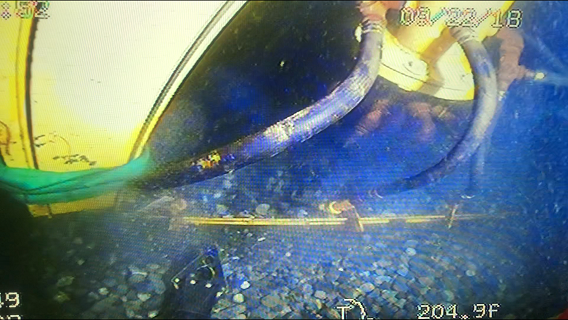 Global was subcontracted to excavate and side-cast bottom sediment around the anchor cables holding Seattle’s I-90 floating bridge in position so the cables could be replaced. The process utilized a jetting tool designed and fabricated by Global, as well as ROV observation to guide the jetting tool into position and monitor the excavation of material.

Prior to beginning each excavation, Global provided ROV support to American Bridge Company’s crew, allowing them to position their work barge above the anchor location and then locate where the anchor cable met with the mud line.  The minimum required excavation area per anchor was 8’ x 8’, with a side-sloped back of one-to-one. Global was required to side-cast the material around the cable socket in order to allow American Bridge’s dive team to safely remove the cable pin and the old cable and install the new anchor cable. Once the excavation area around each anchor was determined, Global’s crew performed debris removal with the aid of the jetting tool. The tool was maneuvered and positioned via the Manitowoc crane and rigging, using the ROV to monitor the tool positioning and excavation. The jetting and ROV work took place in water depths of 170 to 250 feet of fresh water.

The original contract involved the excavation of 8 anchor cables covered by up to eight-feet of lake sediment, consisting of soft silt-like material with occasional ballast rock. The contract was extended to 6 additional anchor cables and removal of a much harder clay-like material at multiple locations. After each anchor cable was excavated, the client witnessed a thorough video survey performed with the ROV to ensure their requirements were met.