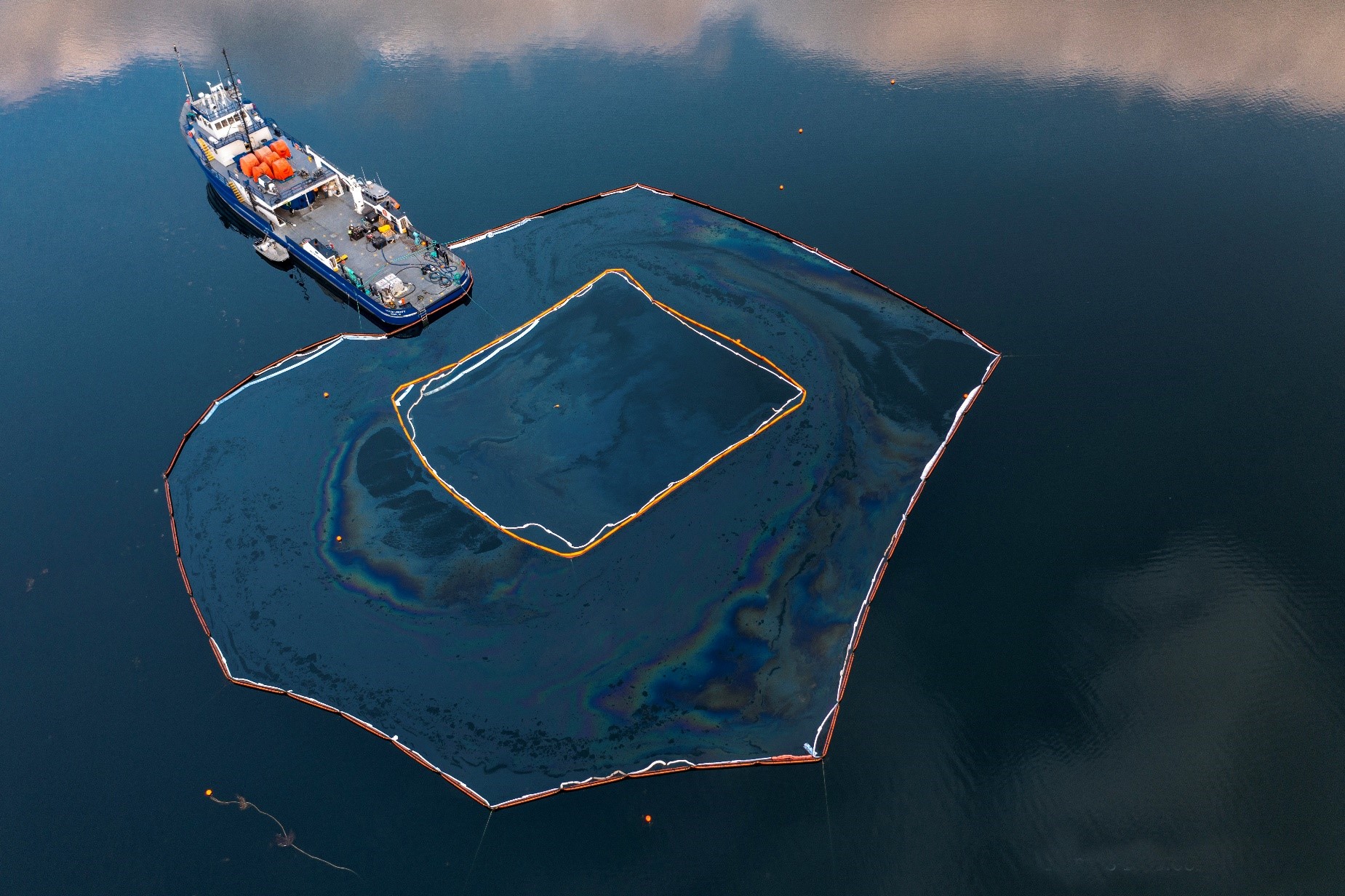 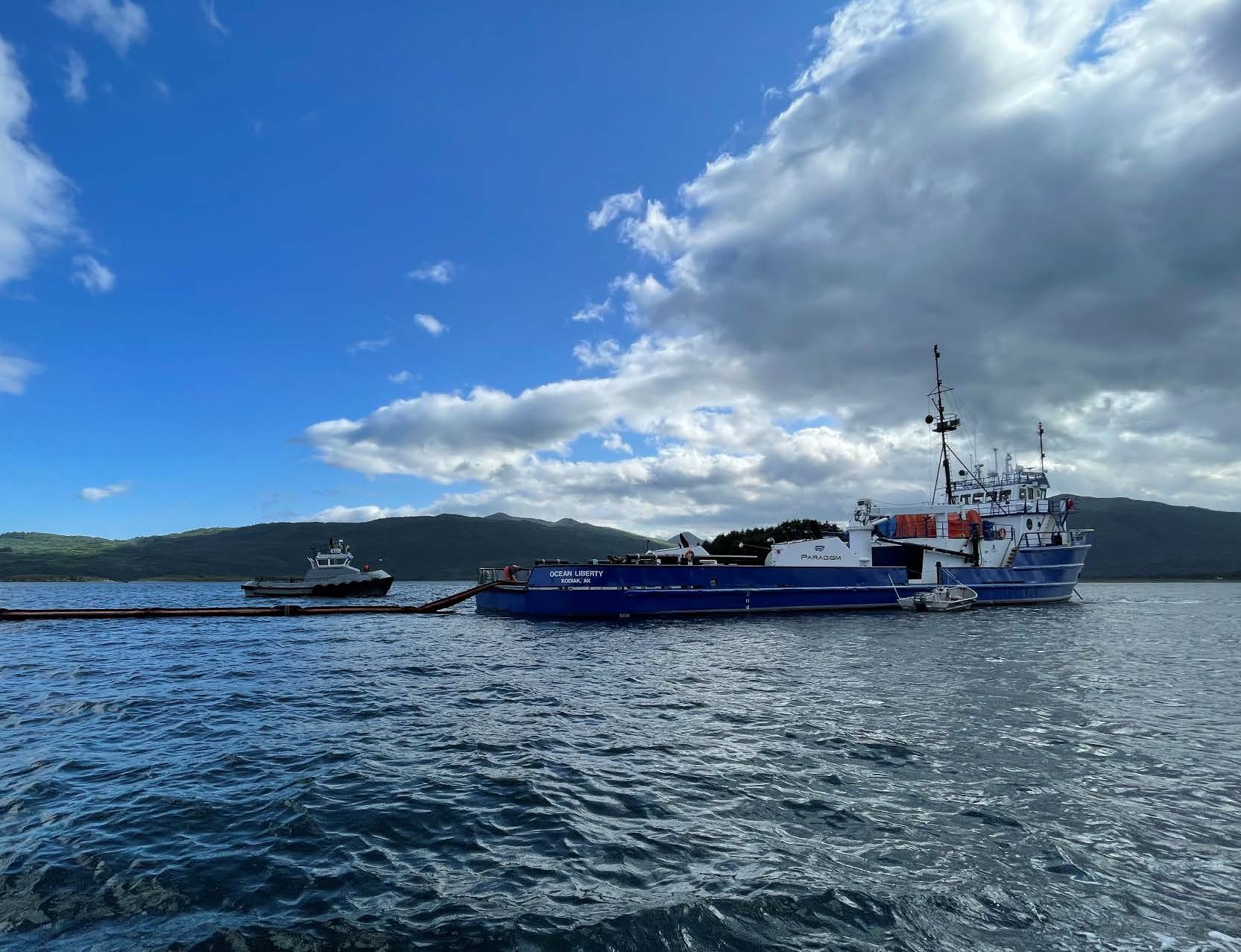 Reports of a large oil sheen in Women’s Bay off Kodiak Island in Alaska were reported on Aug. 5, 2021 just a few days after a large earthquake struck the Alaskan peninsula. A US Coast Guard overflight confirmed the sheen, which appeared to be caused by an unknown submerged source. The USCG contacted Global Diving to respond under their BOA contract. Global and its partners quickly responded out of their Pacific Rim Response Center (PRRC) on Kodiak – the cooperative response to the spill involved Alaska Chadux Network (booming/spill response), Paradigm Marine (vessels OSRV Ocean Liberty, Gus E) with Global acting as Prime Contractor and providing dive support, inspection, and underwater defueling.

A side-scan sonar survey was performed, which determined the diesel source was the 138’ FV St. Patrick, a known legacy wreck that sank in the bay in 1989 with an unknown quantity of fuel onboard.  Containment boom was deployed around the wreck and sorbents placed inside the containment. A HAZWOPER credentialed Global dive team was dispatched along with a surface air dive spread, diving from the OSRV Ocean Liberty. With dive depths ranging from 30-65 fsw, the divers confirmed diesel was leaking through several rivet holes in the hull where the rivets had deteriorated. The divers were able to temporarily minimize the leaking with damage control plugs and epoxy until a defueling plan could be established. With no vessel diagrams available, a naval architect was consulted for information about possible fuel storage areas and volumes to assist in determining the best path forward. The divers measured hull thicknesses w/ a Cignus gauge. Multibeam sonar and imaging was also used to provide more detailed imagery of wreck, including structural components as well as likely tanks and voids.

With the salvage team and agencies awaiting all the data to determine the full course of action, the decision was made to move forward with pumping the confirmed leaking tank. The divers bored a hole into the tank with a magnetic drill and commenced pumping operations, recovering more than 4,050 gallons of diesel and black oil from the tank until only water was being pumped. With all parties reviewing the information from the naval architect, 3d imagery generated from the sonar survey and other factors, the decision was made to begin methodically exploring the other tanks and voids in the hull for potential oil/fuel pockets and remove them. With some areas being deep within the vessel, careful penetration dives were performed after removing hazards. Once all tanks and likely voids had been tapped, pumped and cleared, no further sheening was reported. After several days of standing by, minimal residual sheening was seen within the contained area and after authorization was given from the USCG the crews began their demobilization. Sorbents and tanks of oily water were taken ashore for proper disposal; in total, more than 600 bags of sorbents and 11,955 gallons of oily water were removed during the recovery process.

The project had a number of challenges for the response team to overcome. The logistical challenge of dealing with a response off of Kodiak was mitigated by having some ready assets available at the PRRC. Frequently changing weather conditions required crews to stand down on several days. The greatest challenge was determining the best path forward for defueling; the age and poor condition of the wreck and a lack of vessel documentation required both hands-on dive surveys as well as technology implementation to provide the salvage team and officials with the proper data to make decisions on the proper course of action for defueling.