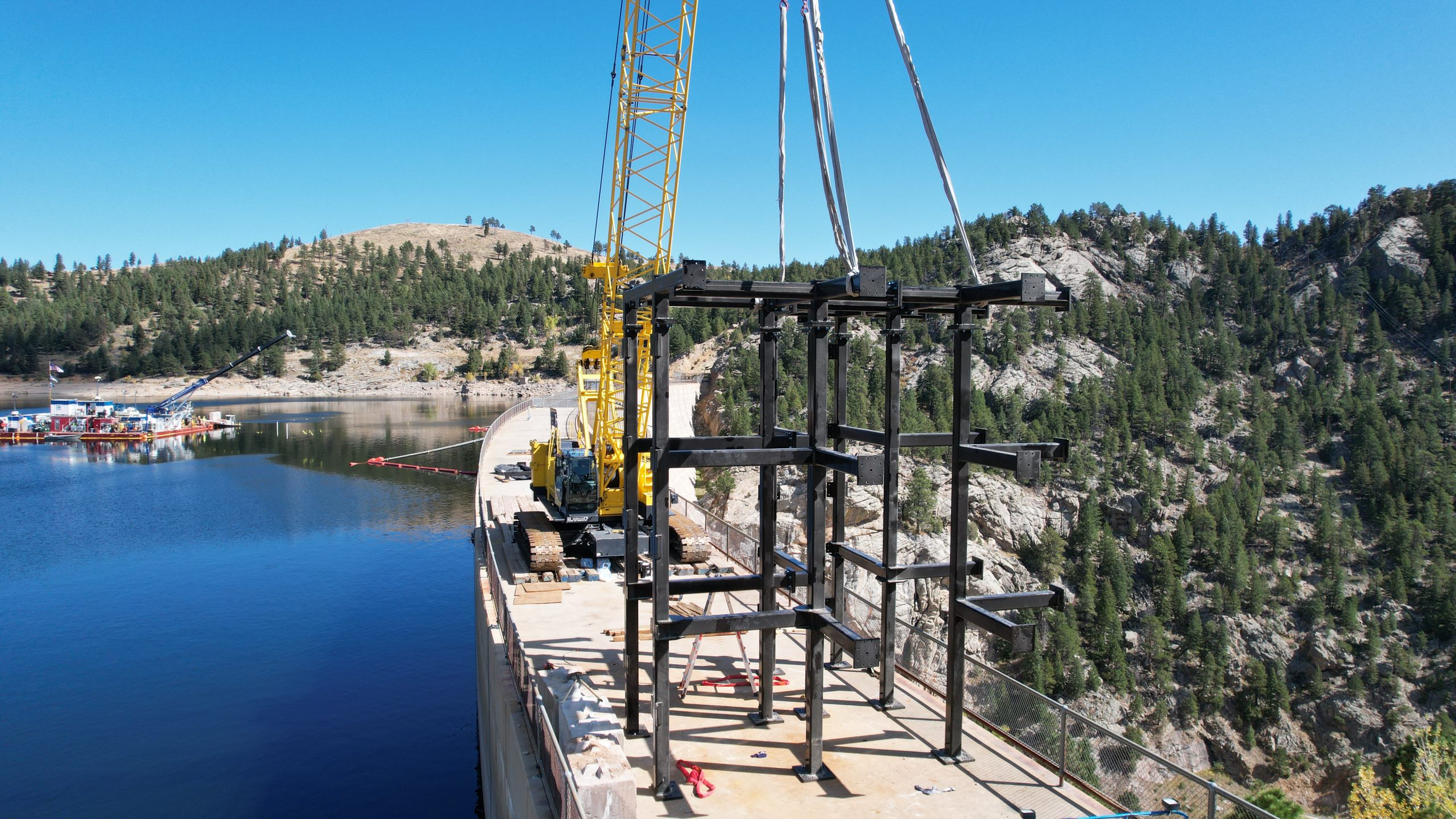 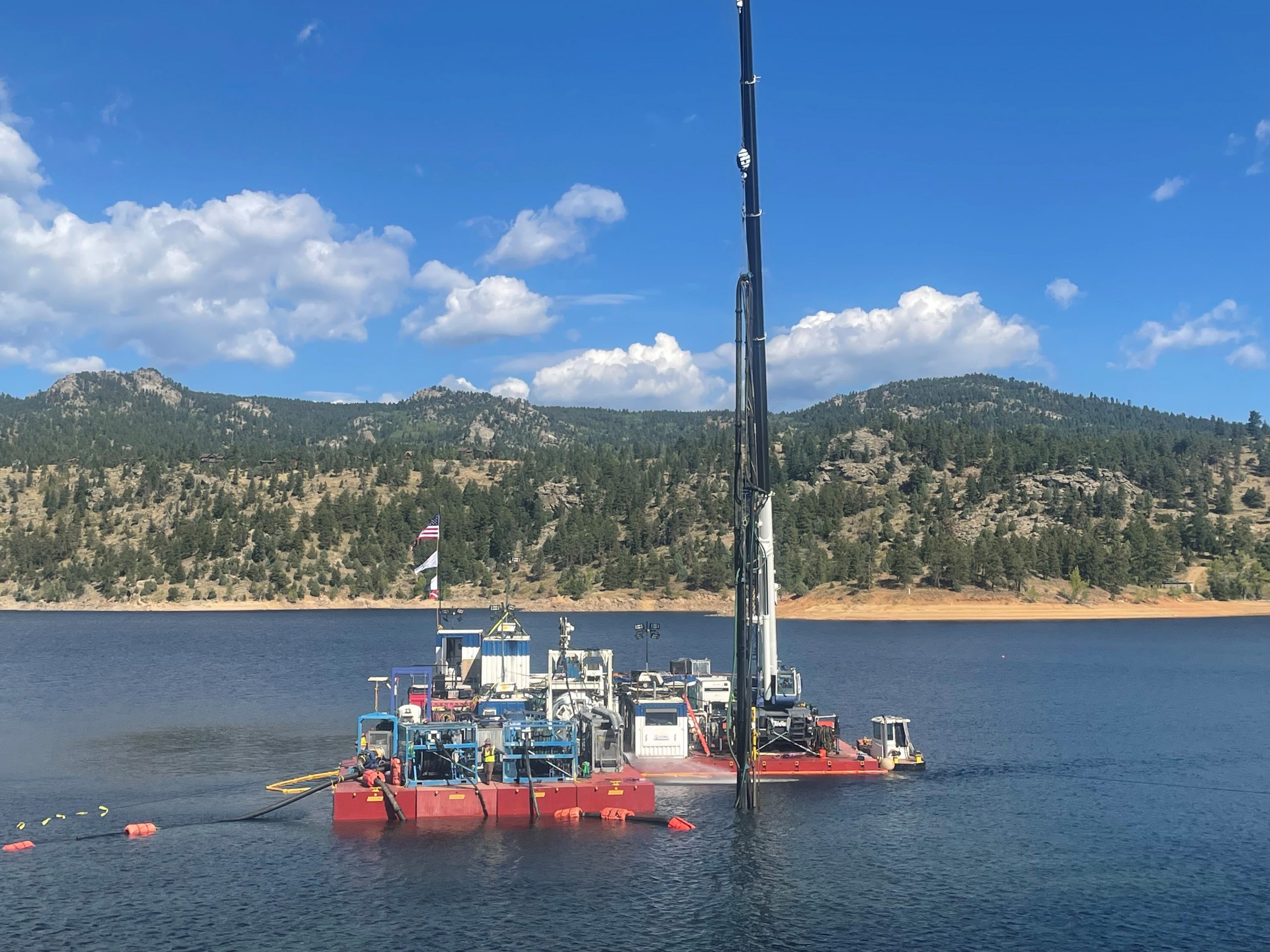 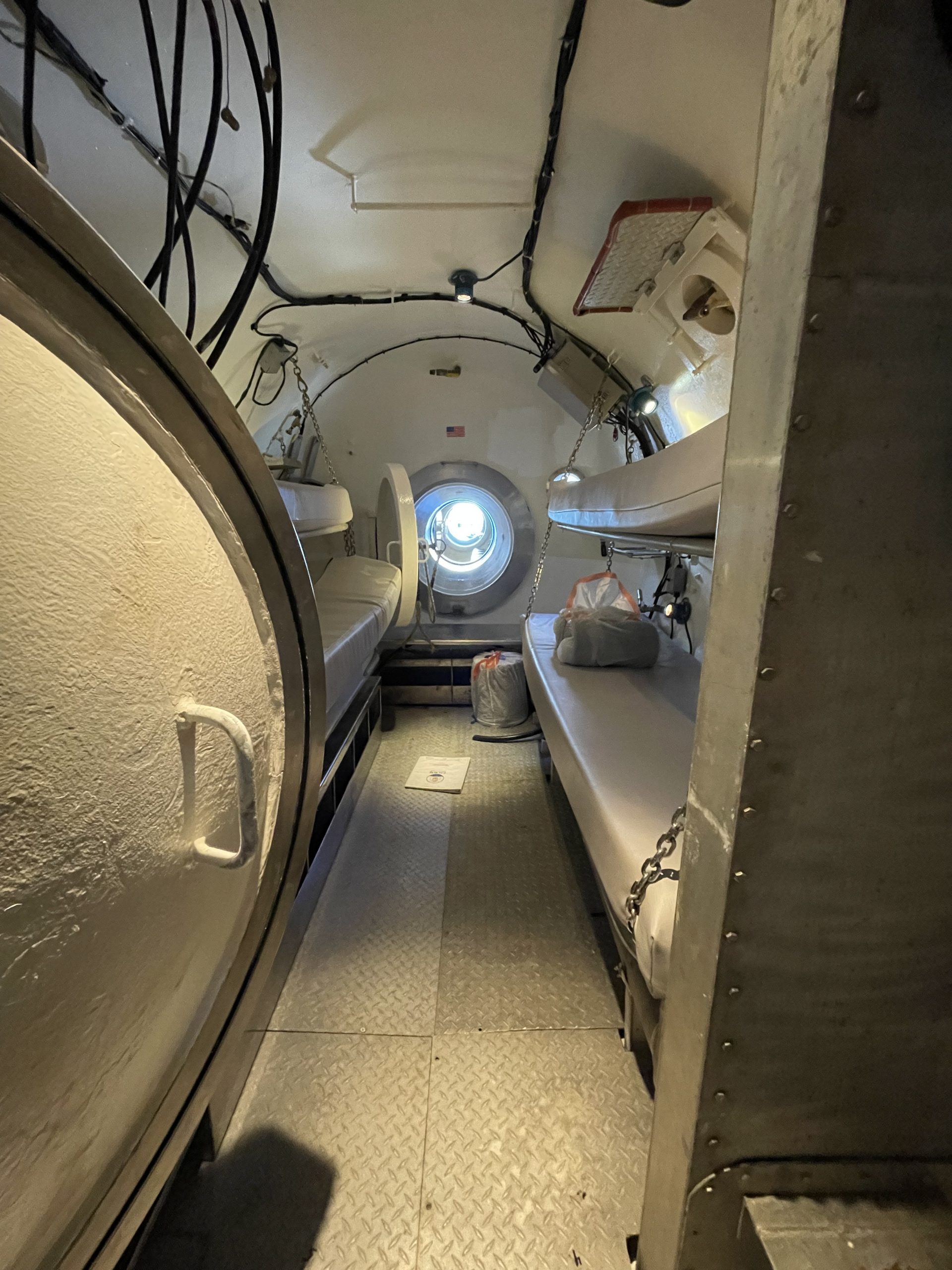 The Primary Outlet Works trashrack structure at Gross Dam was constructed with the dam in 1955; it was comprised of a 25-foot rectangular reinforced concrete frame structure with 27 steel trashrack panels. In 2004, modifications were made by Global to remove two concrete beams and install replacement steel beams and bracings after the installation of a new submerged inlet gate and operator.  The 2021 trashrack modifications project was issued by Denver Water in order to comply with new seismic upgrades required by the Federal Energy Regulatory Commission (FERC).

Although the trashrack was situated in 270 FFW, a 400’ dive table was used due to adjust for the dam’s elevation of 7,280’.  Saturation (SAT) diving techniques were used to allow the divers to have virtually unlimited bottom time; they were pressed down in the SAT system and remained “at depth” for the duration of the project. SAT diving has numerous advantages over surface-supplied air and mixed-gas methods but it does require a large crew and a significant amount of equipment; nearly 60 truckloads were required to mobilize all life support equipment, dive gear, sectional barges and project materials to the site. The narrow and winding dam roads posed a logistical challenge; a local trucking contractor with experience navigating logging roads was brought in to assist with mobilization and each truck was escorted by pilot car in and out of the remote site.

The laydown yard was established near the dam, and a 200-ton crawler crane was trucked in to assist with offloading trucks and site preparation. The sectional steel barge sections arrived and were assembled into an 80’ x 80’ barge to hold the saturation system, life support equipment and an RT crane; a smaller 60’x 40’ barge was built and used to move equipment and materials back and forth from the shore to the dive barge.  A four-point anchor spread was used to keep the dive barge in a set position during operations; two 2,500 lb Danforth anchors prevented the barge from drifting toward the dam while two additional mooring lines were run to two steel plates installed at the dam crest.

The new steel trashrack support structure was fabricated off-site by Rainier Welding in Redmond, WA according to Denver Water’s specifications and trucked to the site. The steel structure was painted with an anti-fouling coating; special care was taken to protect the coating during transit by wrapping it in bubble wrap and plastic. Strict quality control measures and inspections were adhered to throughout the fabrication and coating process.

Once all equipment, materials and crew were on site in Colorado, the team began dredging operations. Global’s Falcon ROV was used to perform an initial survey of the structure and dredging area, as well as rig the top trashrack screens for removal so the dredge head could access the interior of the structure. Sediment was removed from around and within the trashrack using a hydraulic surface-controlled 6” suction dredge provided by Javalier; the Falcon ROV was used to spot the dredge head during sediment removal. Once the divers were pressed to depth, they used an airlifting/sidecast dredging method to remove the remaining sediment that couldn’t be reached with the dredge head; the divers used the same method to perform maintenance dredging throughout the project. In total, the team removed more than 1000 cubic yards of materials from in and around the trashrack.

With the debris and sediment cleared, the demolition of the old trashrack began. The divers used a wire saw to cut the old concrete and steel structure into large sections and rigged them for removal; the concrete floor, back and left side of the existing trashrack was left in place to provide an anchoring point for the new trashrack supports. Once the old supports were removed, the divers ground the walls and floors smooth. The newly fabricated steel trashrack support structure was carefully lowered into place, then the divers drilled holes into the concrete walls and base and attached the new structure using embedment anchors and epoxy. After all new components were installed, the Falcon ROV was used again for the commissioning process to ensure the existing hydraulic gate functioned properly after the new trashrack was installed.

Once all underwater tasks complete, the divers returned to the surface chamber and began their 4-day decompression. During the course of the project, the divers spent 33 days at depth and completed 61 bell runs. The project was safely completed ahead of schedule and under budget to the owner’s satisfaction, with no near misses and no recordable safety incidents.

Like any saturation diving work, the Gross Trashrack Modifications project was a large, complex job requiring significant coordination and planning. Along with the logistical challenges of a remote location and high-elevation dive, weather also posed a significant challenge during the course of the project. With the narrow working window established by the owner’s requirements, late-fall and early-winter storms were a risk throughout the project but were mitigated through extensive planning, establishment of protocols and constant monitoring of the forecast. The crew experienced light snowfalls and one significant high-wind event. To prepare for the high winds the divers remained on the barge in saturation while the barge was moved to a sheltered area in the lee of the dam according to plan. With improved conditions the next day, the barge was moved back into position and diving resumed.

The constantly evolving safety precautions around the COVID-19 pandemic also posed a challenge during the project. Due to the remote location, SAT diving requirements and large crew size, Global made the decision prior to beginning operations requiring all project team members to be vaccinated even before the guidelines were issued for federal projects.