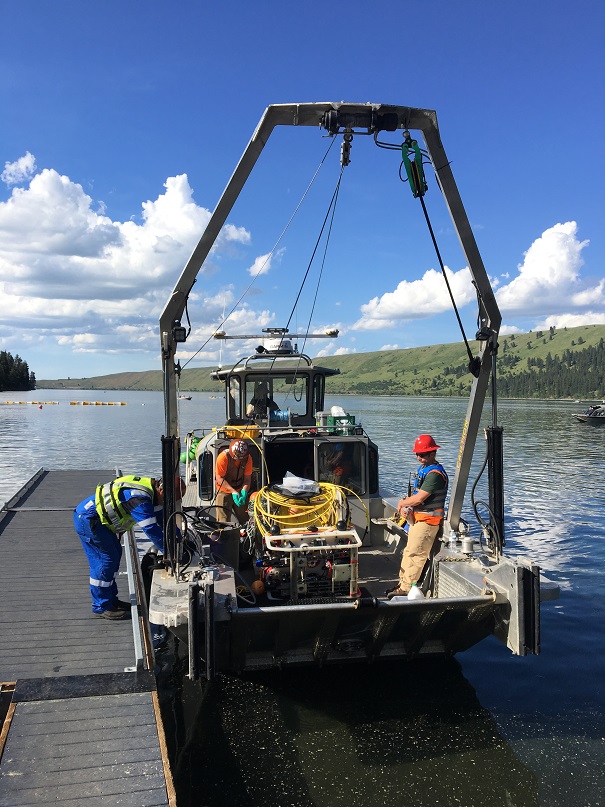 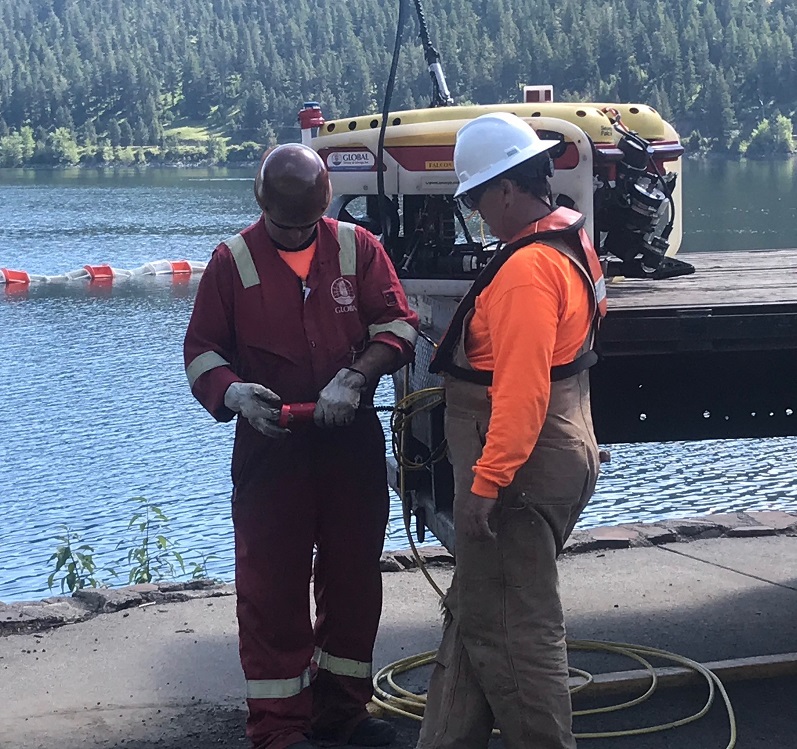 In late 2018, a team of recreational divers discovered several barrels at the bottom of the lake, some bearing labels of herbicides 2,4,5-T and 2,4-D; the combination of which is commonly known as “Agent Orange”. As the lake supplies drinking water to the town of Joseph, OR, authorities determined the barrels needed to be inspected and possibly removed. Global was contacted by EQM to survey the site and possibly recover barrels for further testing.

Global mobilized an ROV team, a 5-person dive team, environmental technicians, and equipment to the site. Gravity Marine Services was subcontracted to provide vessel support, sonar survey and an ultra-short baseline (USBL) acoustic positioning system. The 32-foot R/V TIETON with A-frame crane was used as the ROV support vessel and the 28-foot R/V KLAMATH self-propelled barge was utilized as the dive station. During ROV and dive operations, the flotilla was anchored with a three-point anchor spread.

Using coordinates provided by the recreational divers/client, Global first conducted a sonar survey of the area, then used a Saab Seaeye Falcon-DR ROV equipped with side-scanning sonar, USBL positioning system and live video to precisely locate and visually inspect the drums on the bottom of the lake. Over 3 days, 74 barrels were located; most were clustered in a 300’ x 500’ area at depths ranging from 90-160 ffw. ROV video showed 12 barrels that appeared intact; the other barrels showed holes or were otherwise compromised. EPA officials reviewed the survey findings and identified which barrels would be a priority for diver inspection.

After the initial ROV survey was complete, Global’s divers more closely inspected the high priority targets and took bottom samples near the drums that were marked as containing chemicals. During these procedures, the ROV provided positioning support and additional video observation. Because of the site’s high elevation (4,500 ft) a decompression chamber was staged on shore during dive operations. The divers used mixed gas air diving with in-water decompression methods, and wore HAZMAT suits as a precaution against possible chemical exposure. Tenders for both the ROV and manned diving operations wore Level D PPE, and increased Level C respiratory protection was available if needed.

After the inspection of the priority targets was completed, the client instructed the team to proceed with removal procedures on selected barrels. The divers rigged the targeted barrels for recovery, including the one clearly labeled as 2,4,5-T/2,4-D. Working at a depth of 110 ffw, the diver placed the target inside a larger overpack drum, sealed the overpack drum underwater, then rigged it for recovery to the surface; the ROV was again used to monitor the procedure. Over a period of 3 days, the dive team removed 5 total priority targets. The sealed drums were taken ashore and stockpiled in secondary containment for further processing and waste stream management. Once recovered, officials opened the barrels in a secured area and sampled for immediate hazard categorization.

The project was performed without incident and completed to the client’s satisfaction.