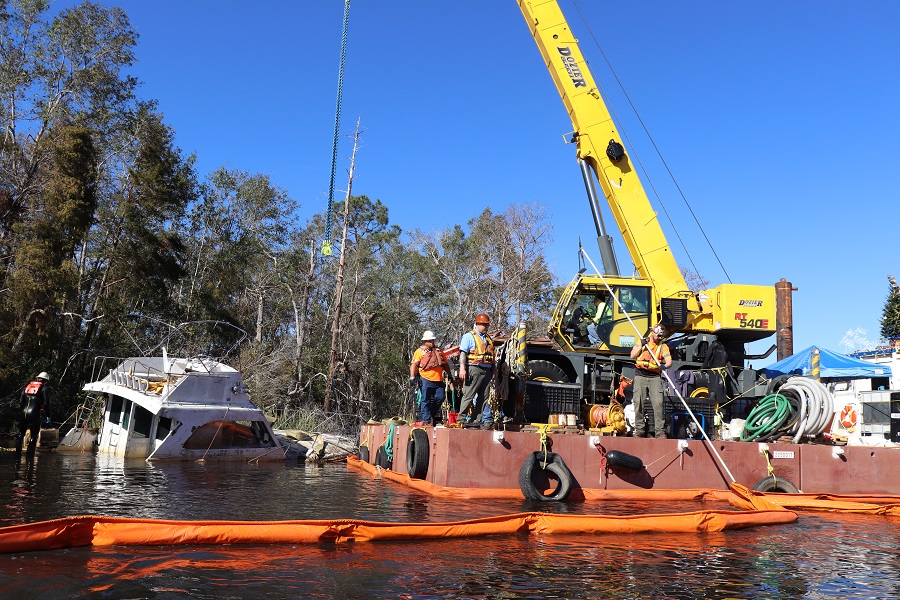 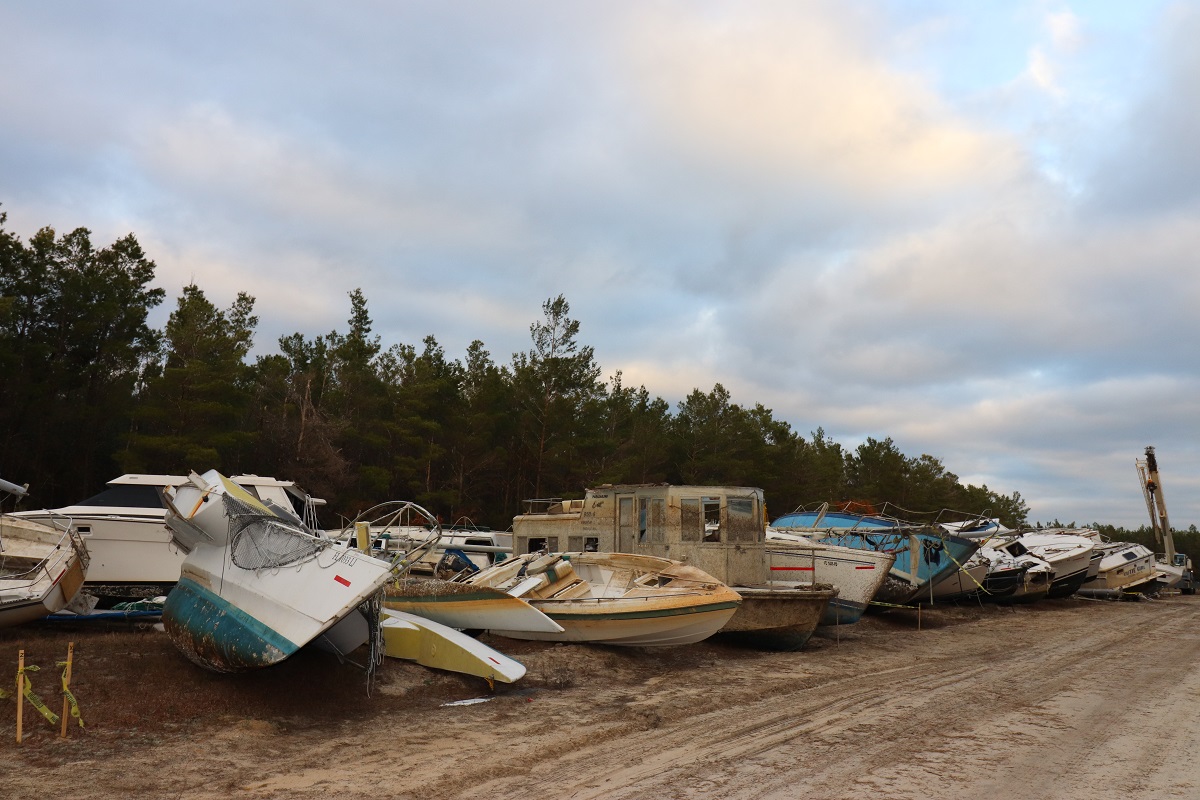 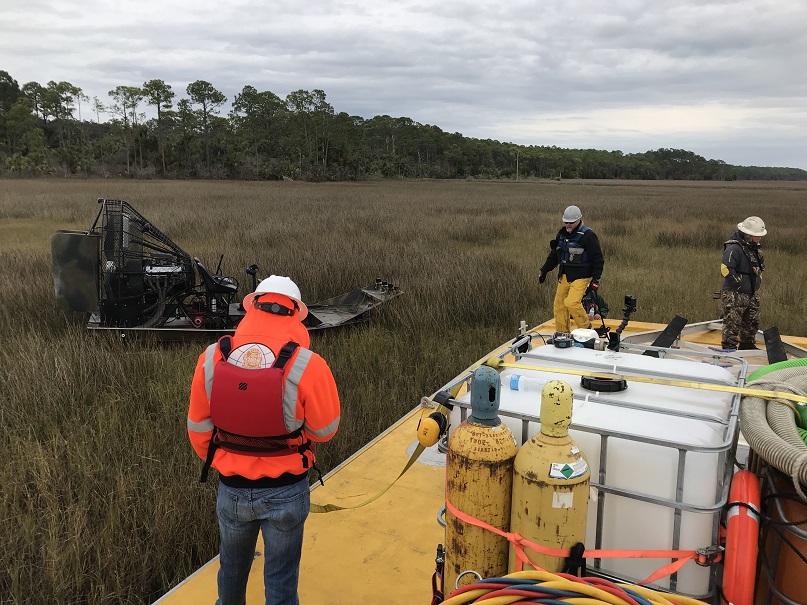 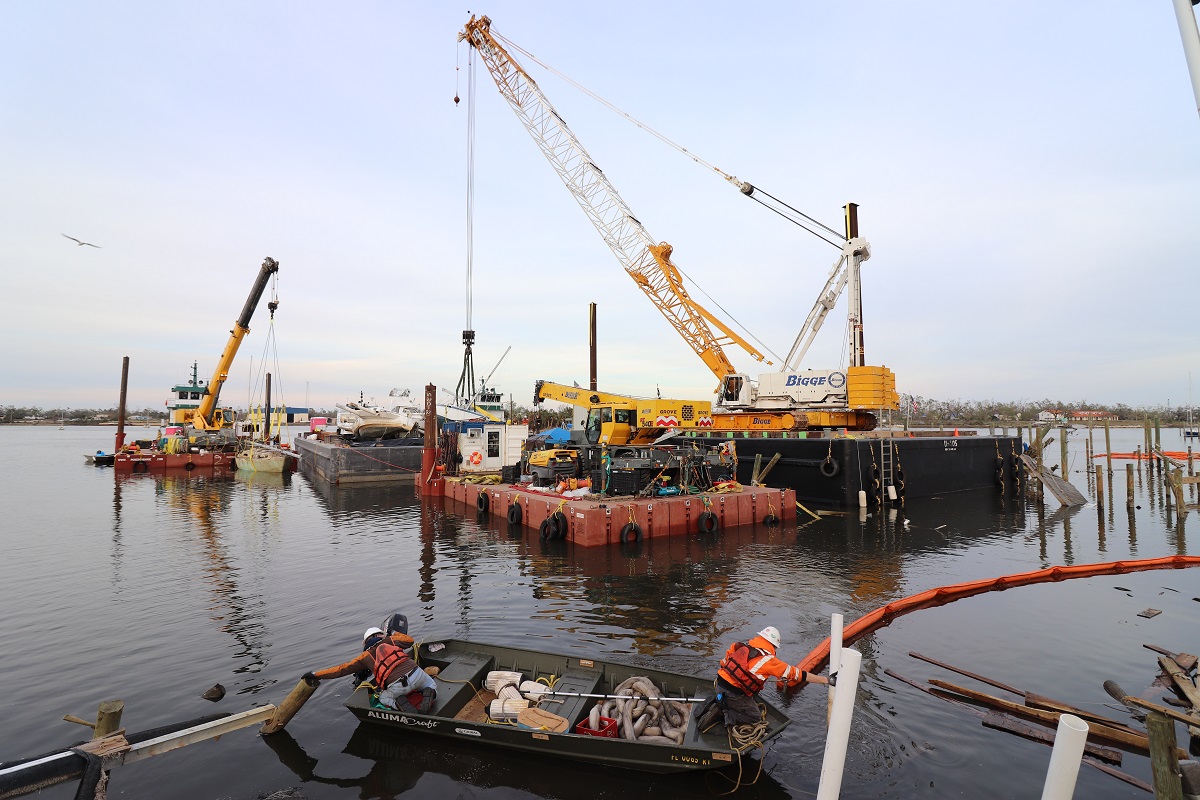 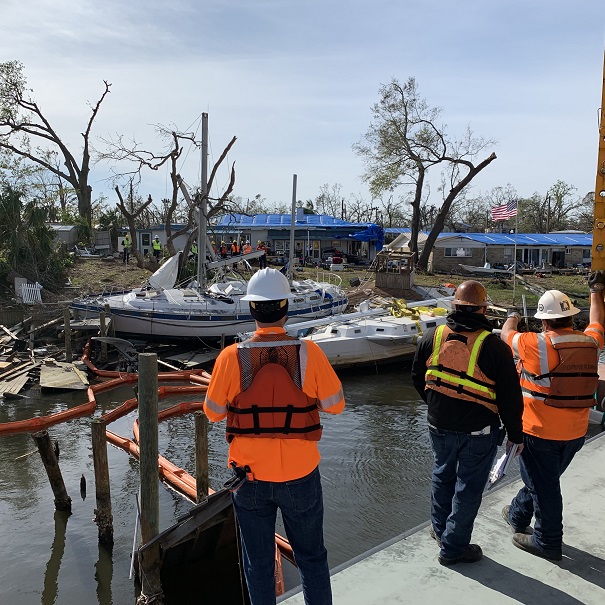 Global works with the USCG and other officials after Hurricane Michael struck Florida in late 2018. 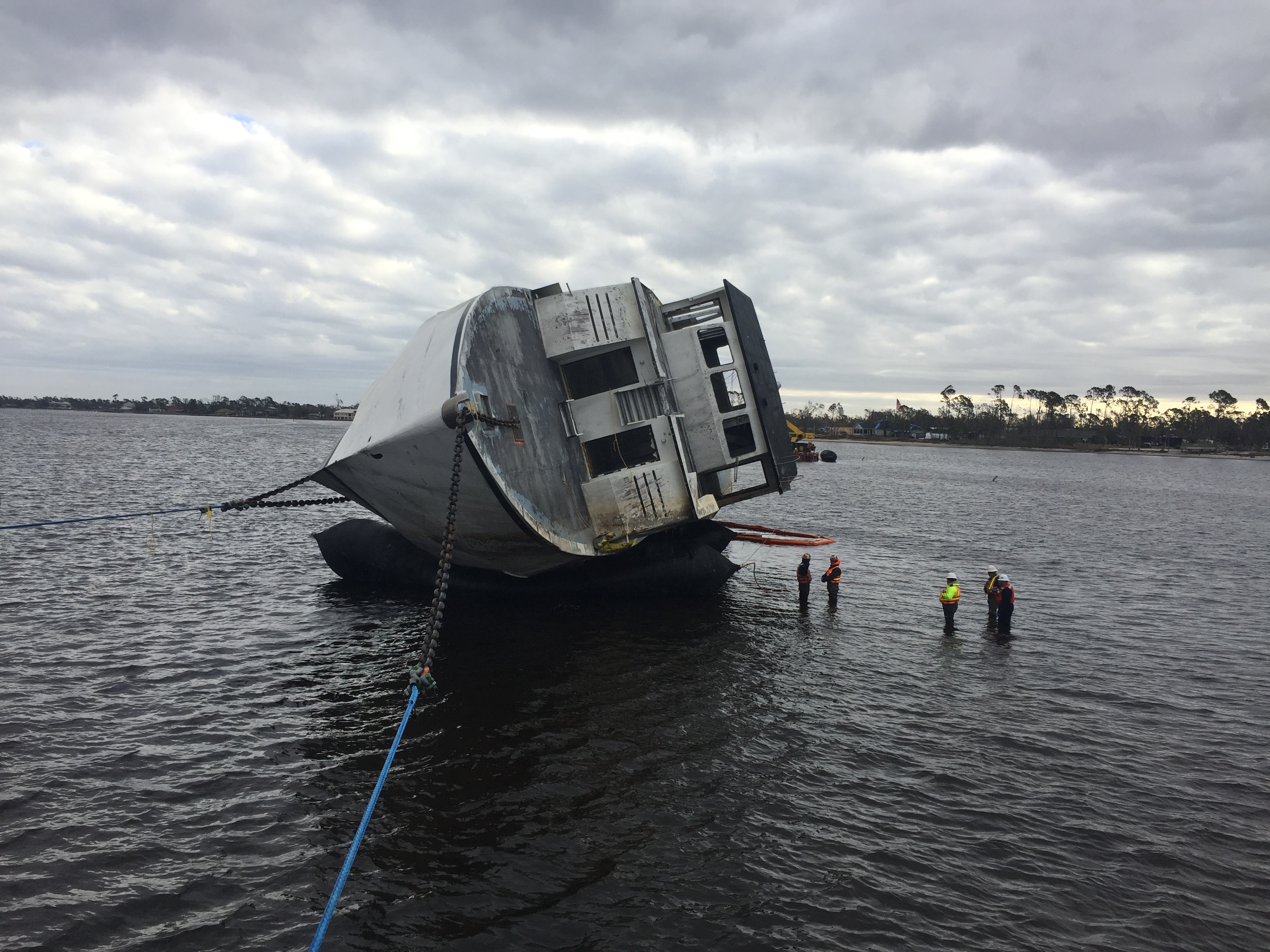 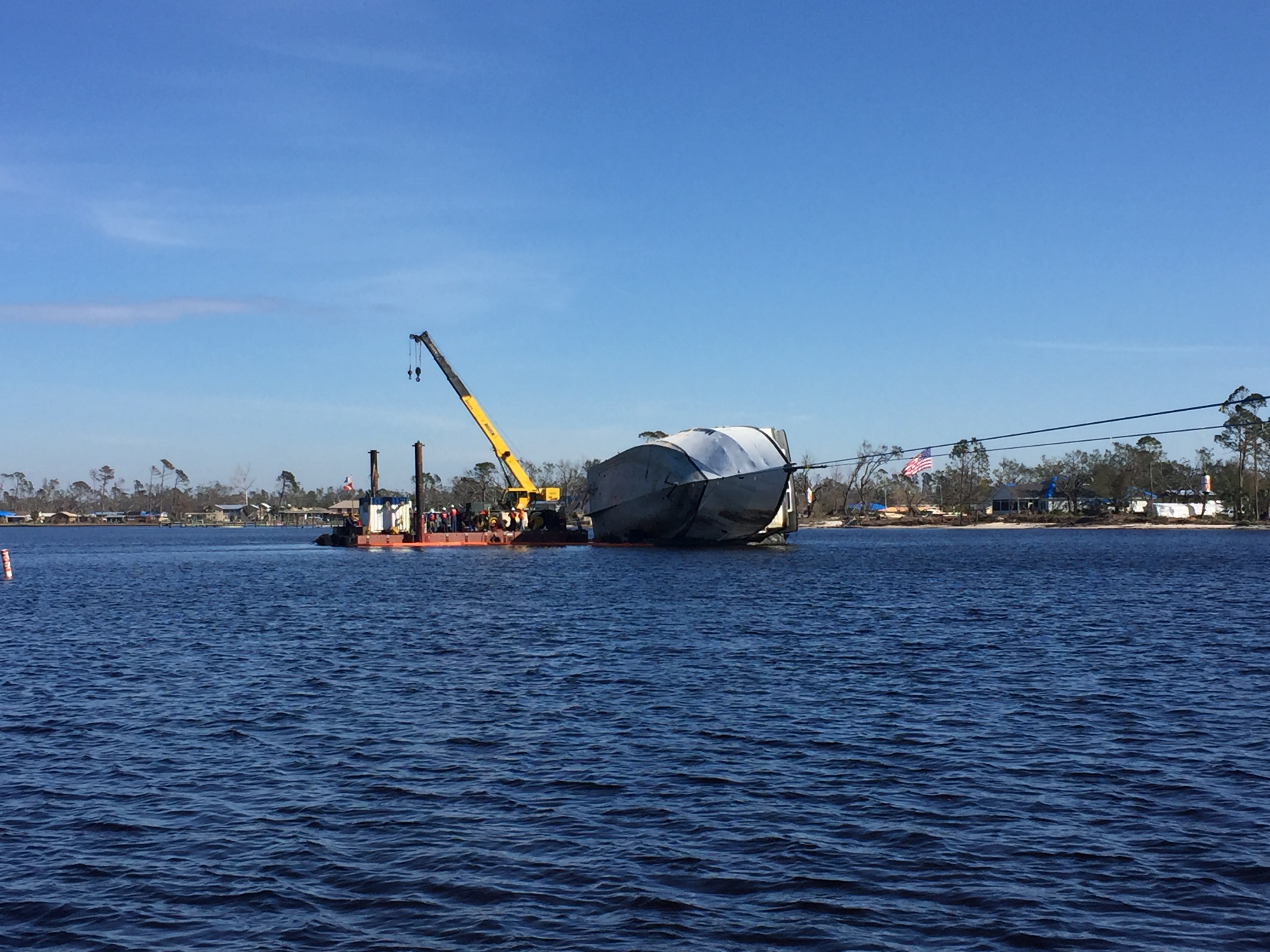 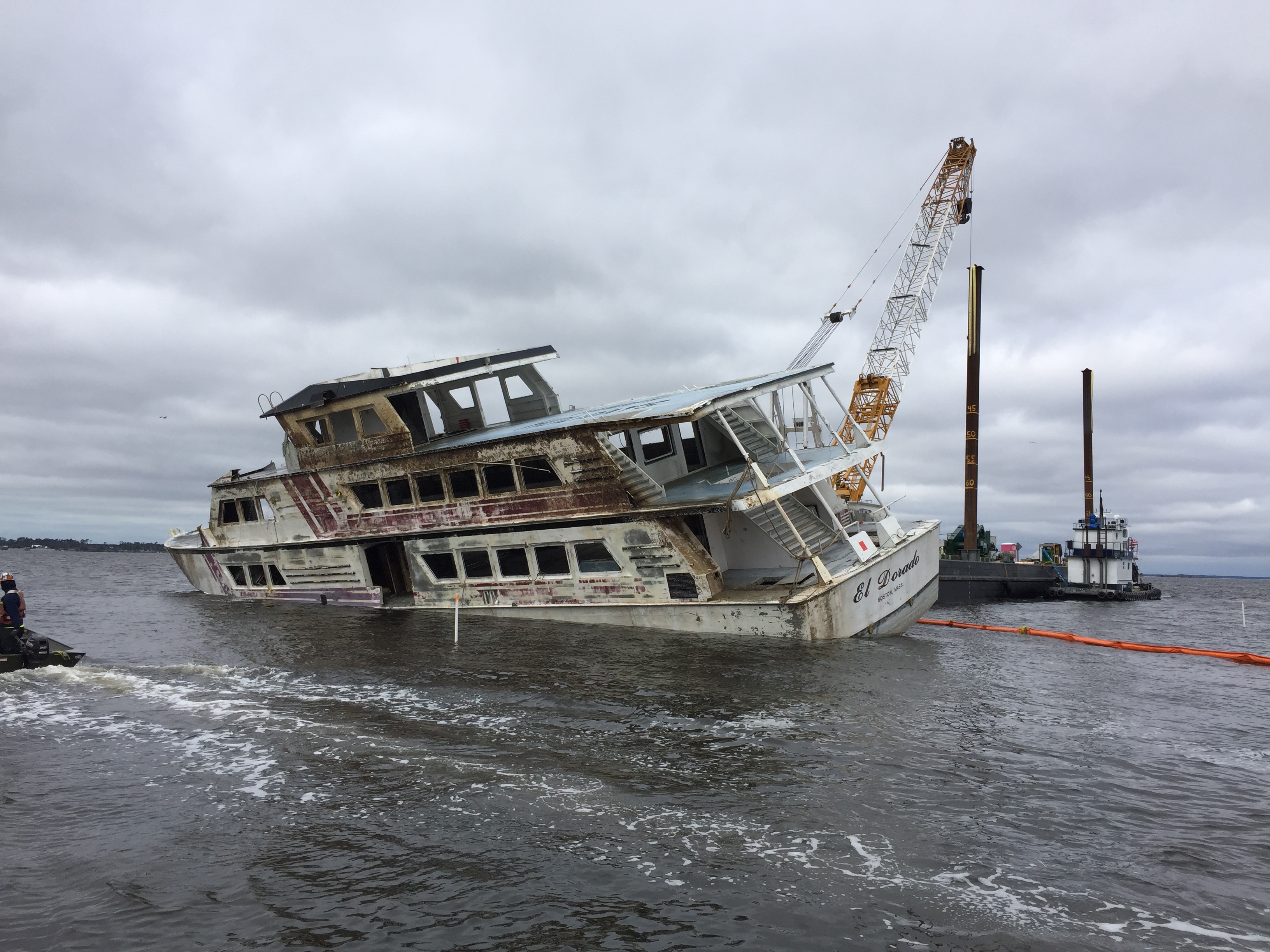 Global was selected as the prime contractor for Hurricane Michael ESF-10 Response, developing the response plan in coordination with the US Coast Guard and Florida Wildlife Commission. Global managed all aspects of the project, including all subcontractors. The team’s mission was to defuel and remove vessels assigned by the Unified Command (UC), working along a 125-mile stretch of Florida coastline between Panama City and St. Mark’s National Wildlife Refuge. Hydrocarbons and contaminants were removed from each vessel, then they were transported to the staging area and turned over to state officials.

At the height of the response Global conducted vessel removal operations 7 days a week, working from 5 barges assisted by tugs; each barge team consisted of a vessel operator, crane operator, divers and environmental technicians. There were also two smaller “hot-shot” teams that specialized in defueling targets. Maintaining close contact with the UC, the crews were able to adjust plans quickly and update targets in real time. The teams removed 175 vessels during the 3-month period and collected more than 55,000 gallons of oily water.

“The response was extremely large in terms of the number of vessels requiring defueling or removal from the water,” said Kerry Walsh, Global’s Project Manager for the ESF-10 Response. “Each vessel was unique in terms of size, location and condition.  Each vessel required planning, coordination with the Unified Command and diligent care to prevent any additional environmental impact. I think the fact that Global was selected to lead this response as the prime contractor, in a location such a long way from our home base, speaks to our reputation and track record.”

The area designated for the recovery effort is environmentally sensitive; there are large protected seagrass beds, oyster beds and wetlands that were threatened by the potential for released contaminants. Global carefully conducted all operations in a manner that would preserve and protect the habitat; most notable was the use of airboats to access particularly remote and shallow wetland areas. The airboats’ ability to travel in extremely shallow waters and over dry patches of land allowed teams to access and remove stranded vessels with minimal environmental impact.

Walsh said one of the most difficult challenges faced by the team was the constant evolution of the project. “The Unified Command worked every day to identify and classify the vessels requiring action by Global.  The status of these vessels changed frequently, sometimes while they were being worked on by our crews.  This required our planning process and our crews to be extremely flexible and in close communication with both the Unified Command and the state and federal personnel overseeing the operations.”

The largest vessel removed by the task force was the El Dorado, a 147’ long aluminum-hulled vessel that was formerly used as a floating casino.  The vessel had been stripped down and was listed for sale when the hurricane broke her moorings and she came to rest 1,000’ away on her port side in a seagrass bed.  The water was too shallow and the seagrass habitat too sensitive to safely remove the vessel with heavy equipment. Global’s team devised a salvage plan using 10m x 2m roller bags and a barge rigged with heavy winches and high performance floating hawsers to heave her out of the shallows. Once the vessel was in deeper water, she was parbuckled with the crane, dewatered, stabilized and delivered to a dock in Panama City where she was turned over to Bay County.