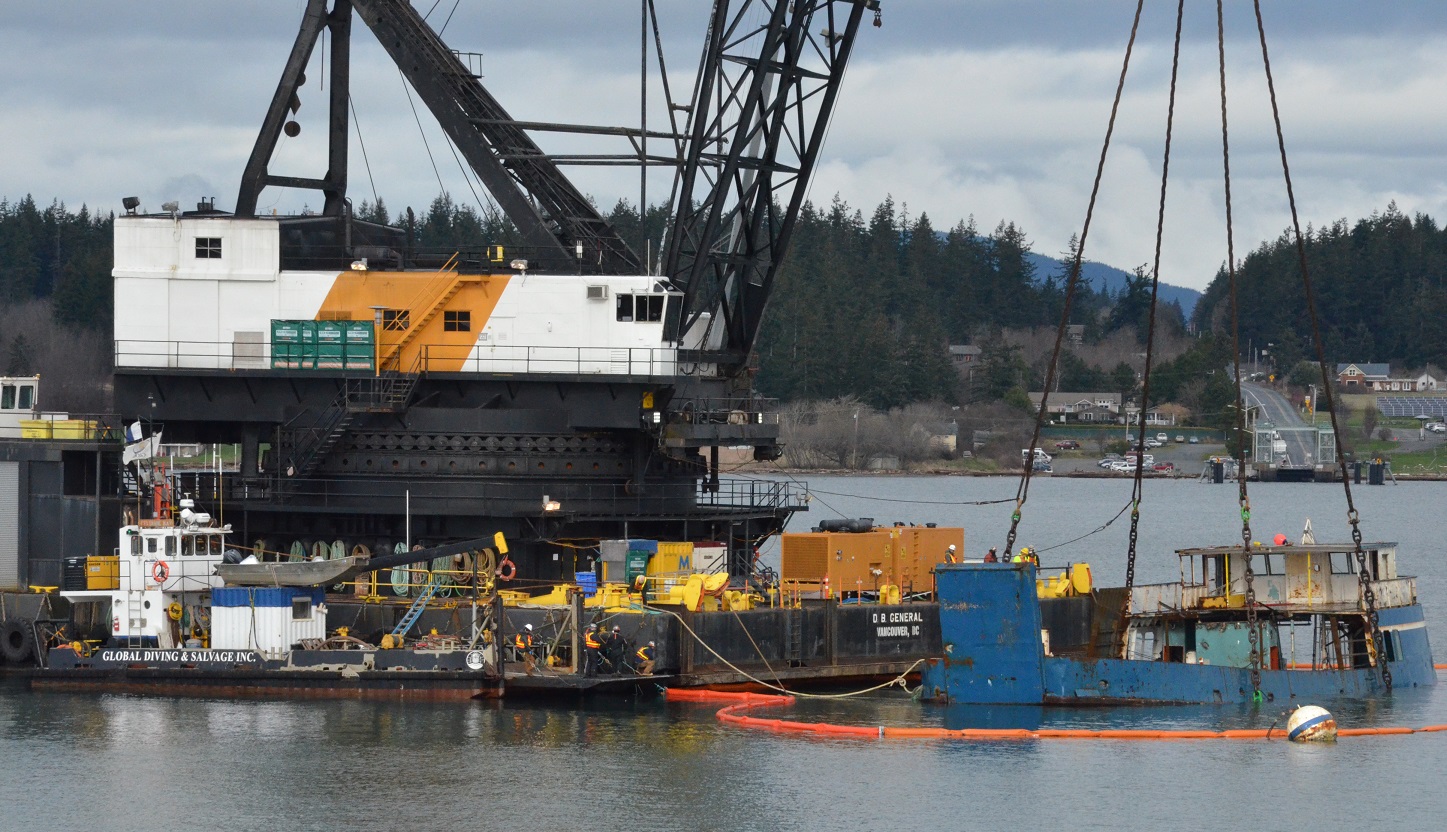 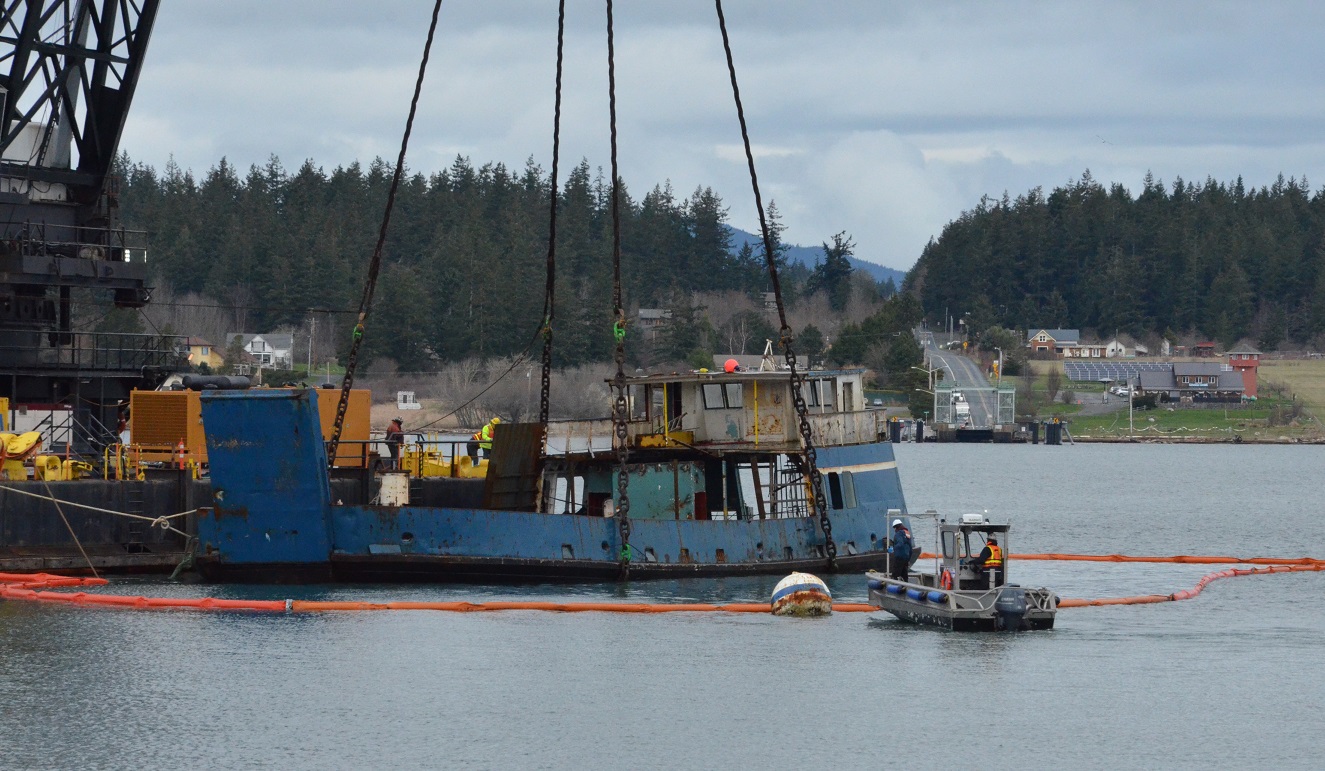 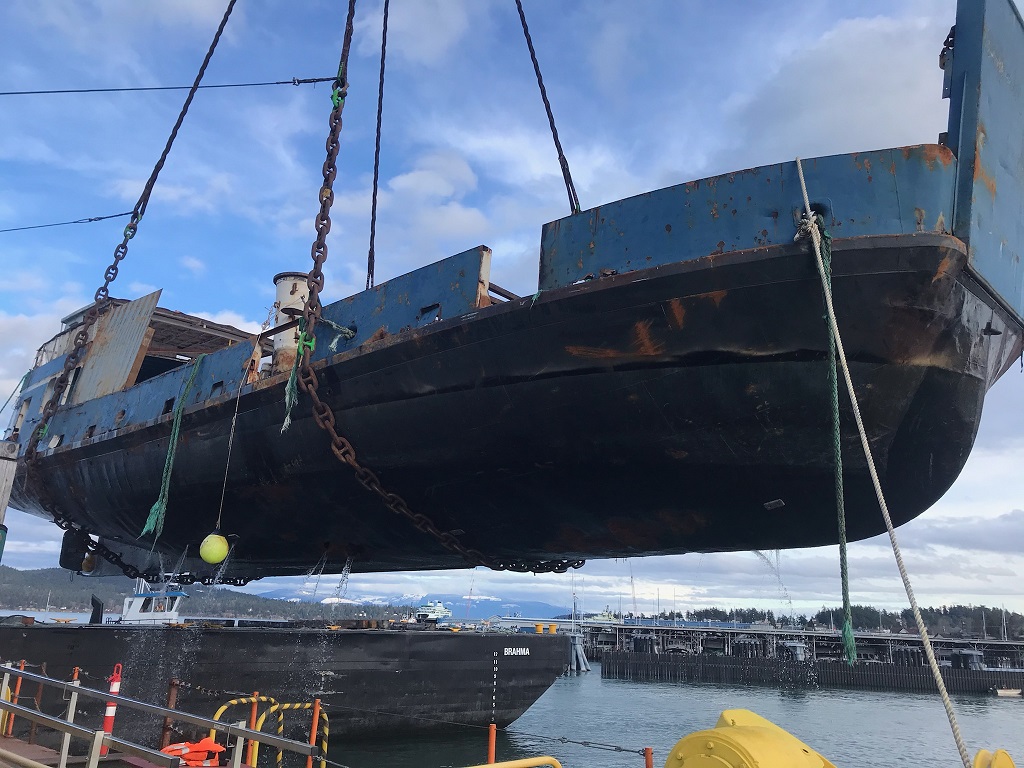 On January 13, 2021, during a severe weather event with wind gusts up to 50 kts combined with a high tide, the MV Chilkat and two other vessels broke loose from a pier in the Guemes Channel in Anacortes, WA. The Chilkat capsized, sinking in 35 FSW just west of the navigation lane for the Guemes Island Ferry. The Washington Department of Natural Resources (WA DNR) took emergency custody of the vessel citing its close proximity to the ferry terminal and potential to break up or block navigation and activated Global crews to respond to the hazard.

Global crews conducted a preliminary dive survey on the vessel to inspect for damage and develop a lift plan. The dive team also marked the vessel with lighted buoys, providing a visual aid to notify boaters in the area of the navigation hazard along with the Coast Guard’s Notice to Mariners.

The steel-hulled 99’ MV Chilkat was the first Alaska state ferry, entering passenger service in 1957 and nicknamed the “Blue Canoe”. After being retired from passenger service she was used as a scallop tender. The vessel was not in service at the time of her sinking, and had no notable amounts of fuel or pollutants on board.

After assessing the vessel’s current position, environmental conditions, and available vessel construction information, the Salvage Master and Brian Thomas of Thomas Naval Architecture developed a plan for the Chilkat’s removal. With an estimated weight of 300-400 tons, local equipment assets that could lift the large vessel were limited. After weighing available options, the Kiewit derrick barge DB General was called in from Vancouver, BC to lift the sunken vessel for refloating.

While waiting for the derrick barge, the dive team began rigging the Chilkat for lifting, running messenger wires to aid in pulling the lifting chains underneath the sunken vessel. The divers also conducted a more thorough survey of the vessel. Because the diving was highly tidal-current dependent, the rigging and survey process took three days. The divers could work safely in up to 2.5 knots of current if they were able to work in the lee, but with currents in the Guemes channel routinely up to 5+ kts, the divers were mostly constrained to diving during the slack tides.

Once the General arrived and was put into position, containment was placed around the site in preparation for lifting. In the process of rigging the Chilkat for the lift, the divers discovered damage to the hull that wasn’t visible on previous dives. Because it would take considerable time to patch and dewater the vessel for floating, the Salvage Team quickly changed plans, opting to pull the Chilkat completely clear of the water and place it onto a barge. A flat deck barge was subcontracted and brought into position.

With the Chilkat fully rigged with chains and everything in position, the team waited for the daylight slack tide. The DB General began making the pick, and as the Chilkat broke the surface the salvage team began dewatering the vessel. The water was pumped into containment with only a small sheen inside the containment but no recoverable release. The vessel was deckloaded onto the barge successfully and derigged. The DB General was released to return to Canada and the site was partially demobed. The Chilkat currently remains on the deck barge, awaiting permitting for the abatement and disposal process.