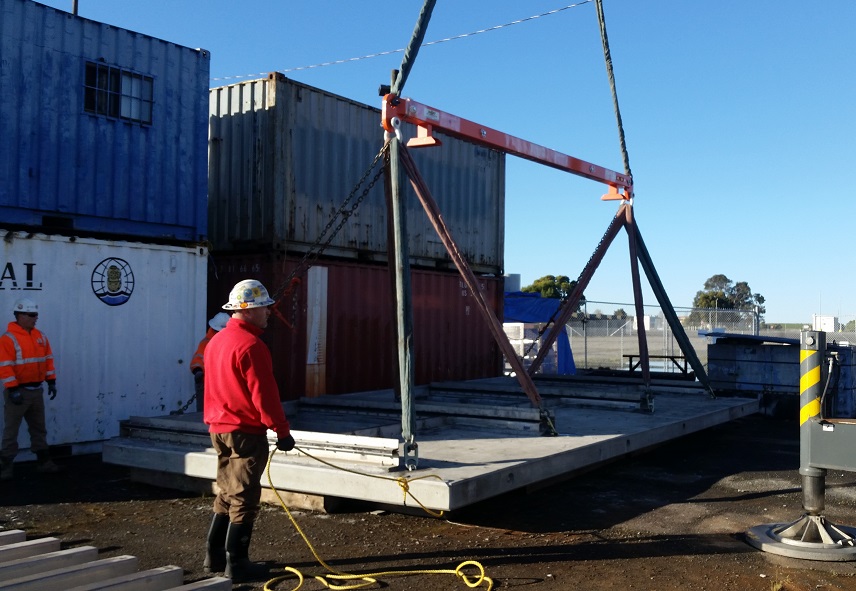 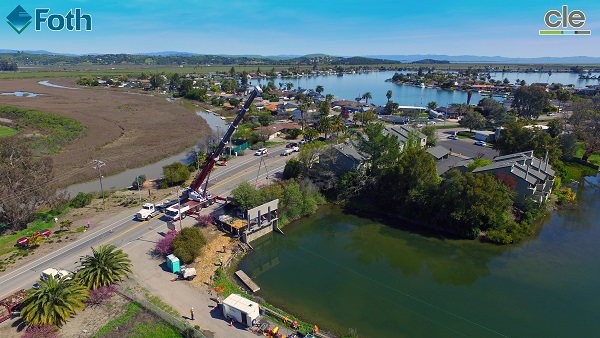 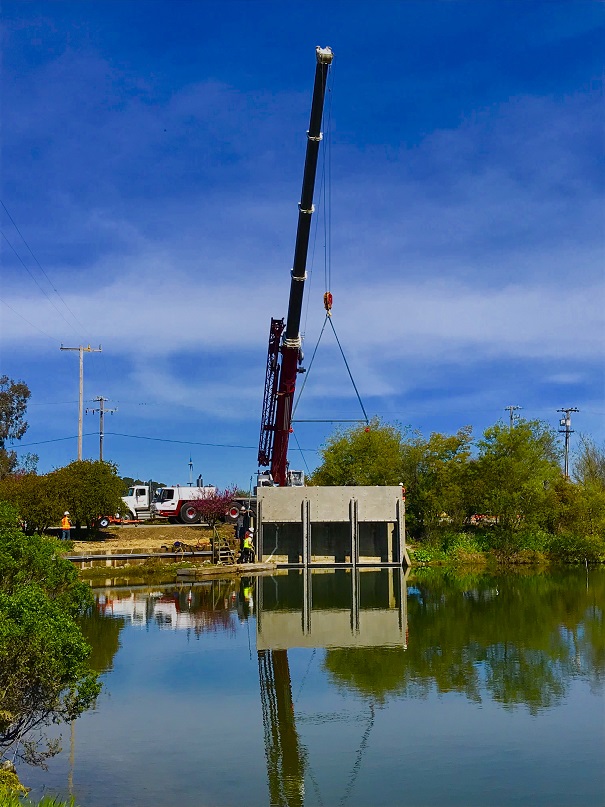 As part of a flood control project, Bel Marin Keys Community Services District (BMKCSD) procured three new stainless steel slide gates to be installed at the South Lagoon Culvert. These new gates would replace the 40-year-old cast iron gates attached to the existing concrete headwall.  During the removal of the existing gates, it was determined the concrete headwall was compromised and unsuitable for anchoring of the new stainless steel gates, warranting a significant redesign. In November 2017, Global tendered a bid to complete the revised scope of work, requiring a new precast concrete headwall to be installed to the existing concrete culvert wall prior to gate installation.

The 30,000 lb, 26’ x 14’ owner-provided panel was fabricated with the three stainless steel slide gates and frames already mounted and attached with cast-in J-bolt anchors, then transported to Global’s yard on Mare Island, CA. The original design plan called for the gates and frames to be removed before installation so a rubber gasket could be inserted between the frame and the precast panel; however, the way the panel was fabricated it was determined that removing the frames might damage them or the panel. After consulting with the project engineers, the team opted not to remove the gate frames or use the rubber gaskets; instead they constructed forms on the panel and poured grout to fill the voids left around the attached frames.  While the panel was being modified, a Global dive team went to the installation site to pressure wash and prepare the existing panel and gates; the team used a surface-supplied air dive station and worked from floats. They also performed minor excavation around the structure to allow enough room to fasten the through-bolt hardware that would secure the new panel to the existing concrete. The dive team also took a series of measurements to ensure the new panel and hardware would align correctly with the existing components.

While putting together the crane lift plan for the panel installation, Global’s project manager notified the project engineer and crane operator about a potential issue with the designated lift points for the panel. The face anchors were rated to pick the panel up from a horizontal position to a vertical position, but not to take the load into a vertical pick; the four anchor points at the top outer edge of the panel were engineered to take a vertical load, but not the shift from horizontal to vertical. To solve this, the parties developed a two-crane solution. A smaller crane was used to make the pendulum pick from the horizontal to vertical position, while the horizontal points were pre-rigged for the pick with the larger crane. The two cranes would “shake hands”, transferring the load from the horizontal to the vertical points; once the panel was in its vertical position in front of the dam face, the horizontal points were derigged. The gate hardware was removed from the precast panel prior to the pick, and would be reinstalled after the new headwall was in position. The site was adjacent to a busy two-lane road that remained open throughout the project; during all crane operations flaggers were utilized to keep the flow of traffic moving safely around the cranes.

While the precast panel was being prepared for the pick, Global’s dive crew was disassembling all the actuators, stems and guides at the existing headwall. The panel was lowered into position, remaining on the crane while the crews cored holes and inserted expansion anchors into the existing concrete structure, inserting bolts to be epoxied with HILTI adhesive. After the new panel was affixed to the existing headwall, set and cured, it was derigged from the crane and the stainless steel gates were installed. The stems, guides and actuators were attached to the new gates and tested under the direction of the engineer. With all gates operating properly, the divers’ final task was to clear debris and remove the temporary diverter panels from the discharge outlets.

Although the project experienced constructability issues requiring design changes early on, the cooperation and clear communication between Global, Foth and the other parties involved allowed an alternative solution to be successfully implemented. Although the frame grouting work was not part of the original proposal and resulted in additional time and materials costs, the solution proposed by Global was far less costly than making modifications at the precast plant or in the field. A clear understanding of picking points and rigging was also critical to the project; utilizing the two-crane solution for the final panel lift reduced the risk of rigging-point failure while being far more cost effective than making additional panel modifications.