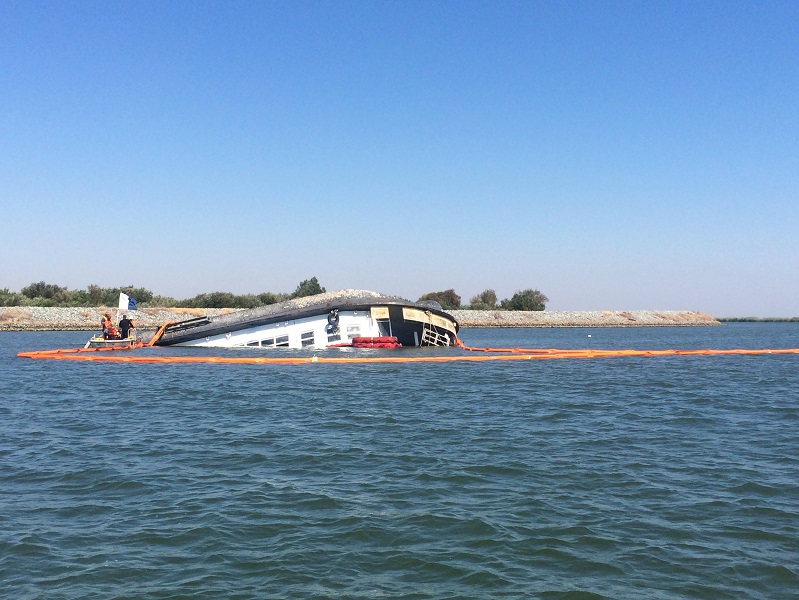 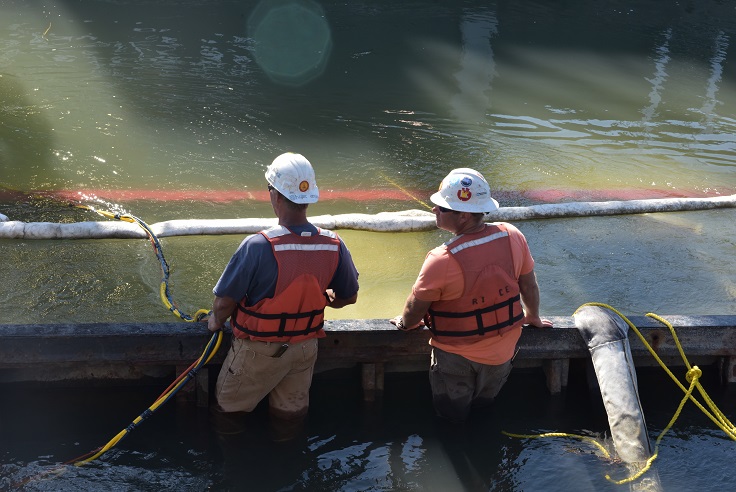 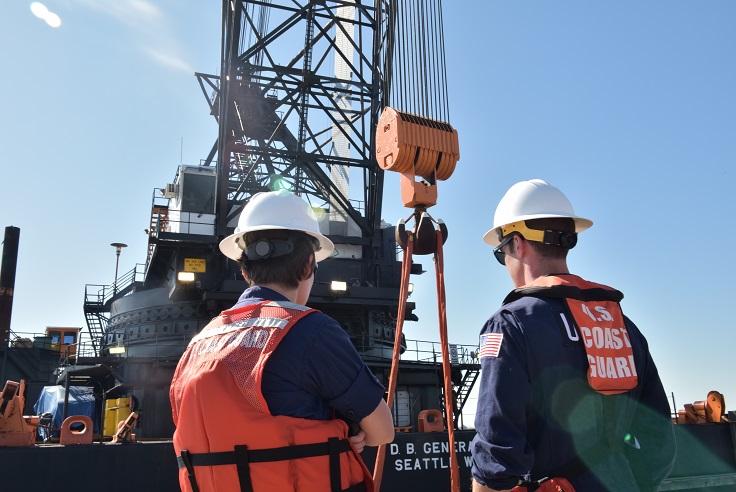 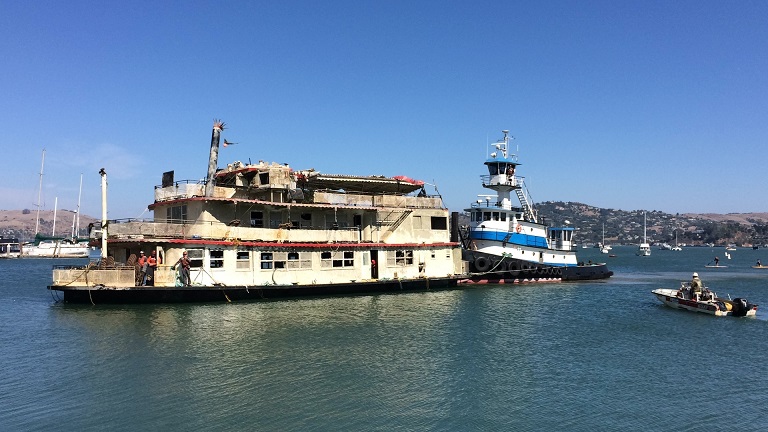 Raising a Riverboat – the Challenges of the Spirit of Sacramento Salvage

No two salvage operations are alike. The team at Global Diving & Salvage, Inc. knows that the differences are what make every project a challenge. When the Spirit of Sacramento sank, the Global crew was called in to salvage the vessel. The project proved that the most difficult projects are often the most rewarding, and there are few situations that teamwork and ingenuity can’t overcome.

The Spirit of Sacramento, a sternwheeler, was previously known for carrying tourists along the Sacramento River to and from the California Delta. But in August 2016, with just two crewmembers aboard, the vessel encountered a serious problem. Water started pouring into the engine room, eventually causing downflooding and capsizing the vessel. The crew escaped unharmed, but the vessel sank to the sea floor with a reported 600 gallons of diesel fuel onboard. With the potential for serious environmental damage, Global was called to the scene and immediately started to evaluate the site.

“We got familiar with the vessel and its surroundings: the water depth, the currents, weather, and other navigational obstructions,” said Global Salvage Officer Kyle Watson. “We also put divers in the water to give us an overall understanding of the vessel to see if they could identify a potential cause of sinking.”

The divers didn’t find any exterior damage to the vessel, so Global determined there was likely a leak in a pipe, a shaft, or elsewhere inside the engine room that caused the boat to flood and sink. “Since it didn’t have any smoking gun damage,” said Watson, “there was a high likelihood we could make it float again without having to do any kind of extensive repairs.”

After evaluating several options, Global decided to raise the Spirit of Sacramento with an overhead heavy lift. But the surrounding environment posed several problems. The Spirit of Sacramento sank in an area called False River, which is known for strong currents of up to two-and-a-half knots. There’s also a short slack water window in the area, with just 15 to 20 minutes between high and low tide. Those conditions are challenging for divers. When Global first arrived at the scene, the Spirit of Sacramento was completely capsized with its keel visible above the water. “We have techniques to manage that situation, but this one was going to be fairly tricky,” Watson said. “Our plan was to effectively roll the vessel over onto its keel before we could lift it up.”

After a full day of working on the boat, the Global crew went home for the night. When they came back the next morning, the Spirit of Sacramento was sitting on its side. “The current had somehow rolled the vessel over 90 degrees, which vastly changed the scope of the project,” said Watson. “That was a bit of a curveball that came up in the middle of the job. We had to readjust our plan midstream. It actually made the job easier, but it was still something we had to adapt to.”

The Spirit of Sacramento had shifted but still needed to be rolled onto its keel. On top of that, there was another problem. Since the vessel was only meant to travel on service or protected waters, the boat was very lightly built. “We had to be delicate with how we rigged the vessel to ensure it would stay intact while lifting it with a crane,” Watson said.

The team decided to reinforce the hull to keep it from collapsing when they picked it up, which called for some crafty engineering. Field crews fabricated the pieces they needed on-site to help move the salvage along quickly. “The particular fabrication we had to do on this project was unique just because the design of the boat,” Watson said.

While Global coordinated with various local subcontractors for the Spirit of Sacramento project, they were forced to outsource a crane from Seattle for the heavy lifting. “There was nothing in the Bay Area large enough to lift the vessel, so that was pretty unique,” Watson said. “We have personnel and equipment staged strategically along the coast for this type of response.”

With the assistance of federal and state agencies, Global successfully parbuckled and lifted the Spirit of Sacramento from the sea floor without causing further damage. In the process, no fuel was spilled. “The boat came right up to the surface as planned,” Watson said. “That was a big high.”

With that phase accomplished, the team moved on to the challenge of removing the abandoned Spirit of Sacramento from the bay. “The Bay Area really lacks a facility suited for receiving a vessel like this after it’s raised,” said Watson. “There are two functioning shipyards, but they are large, very expensive operations designed to receive 600-foot ships for repairs.”

Several smaller facilities in the region turned the Spirit of Sacramento down, so Global’s only option was to obtain a dead ship tow permit from the Coast Guard. That allowed crews to take the vessel 56 miles to an Army Corps of Engineers dock in Sausalito. But, that tow came with yet another issue.

Global removed the saltwater from the Spirit of Sacramento with trash pumps after it was raised. But since the boat was sitting on the sea floor, sediment had also collected inside the vessel. In addition, the water had soaked into the boat’s shag carpet, mattresses, and other porous materials. The boat originally had 18 inches of free board, but with all the added weight, Global was now working with just 3 to 4 inches above water. “Those are pretty narrow margins to work with from a stability standpoint,” Watson said.

Despite it being a long and difficult haul through the busy Bay Area, Global delivered the Spirit of Sacramento to Sausalito without incident. “There’s definitely a sense of accomplishment,” Watson continued. “All the planning, the naval architecture, the engineering, and then the work the divers did – it all came to a head and it worked. That’s definitely a proud moment.”

Before Global demobilized from the project, they were also contracted for hazardous materials abatement on the Spirit of Sacramento. The crew conducted a full sweep of the vessel, removing batteries and flushing fuel lines. “We completed the project with zero injuries or incidents,” Watson said. “A good safety program in a warehouse that loads trucks with forklifts everyday is one thing, but having a solid safety program when you go out and do what we do is very challenging. Global has been very successful in setting the standard in our industry.”