Just as you should never take a knife to a gunfight, you should never take a 34-foot sailboat to a rowing competition. This year’s Race to Alaska was marked by hot windless days, glassy seas and zero big storms – a 180-degree shift from last year’s race that made it even more challenging than usual for the teams counting on sails to help get them the 750 miles to Ketchikan.

But they came, they rowed and they conquered anyway. Team Global placed 13th finishing in 9 days and 2 hours; a full 24-hours sooner than the team’s 2017 race finish.

Captain Katy Stewart said the biggest challenge of the race was actually the preparation. Starting only 5 weekends before the race, Team Global was on a tight deadline to make a boat that had been moored for nearly 10 years seaworthy again – plus they had to design, build and install the rowing stations, remove the motor (per race rules), gather supplies and put together a strategy. And the crew did it all without knowing each other. “For a group of people that hadn’t met each other until the race start in Port Townsend, it came together pretty damn well,” Stewart laughed. “No matter what, there will be some growing pains when you’re out there learning the boat together and strategizing. It took a couple days to mesh, but we all came together and made a great team.”

Stewart said that the weather for this year’s race was a big surprise. “After the cold, rain and high winds last year we expected at least some of that again but it didn’t really come; we weren’t really sailing until the stretch between Bella Bella and Dixon entrance. We did a lot of rowing, so I was very happy with how the human-powered portions worked and that we broke relatively few things.”

First-time R2AK-er Lara Mayer said the camaraderie between the teams, volunteers and fans was the highlight of the race. “There were little friendly rivalries; teams would call each other on the radio and push each other to work a little harder, but in the end we all just wanted everyone else to succeed and have a good time. At the dock, teams were helping each other out, lending each other tools or giving them a part to fix something that broke. After the race, two members of the media crew helped us wrangle our motor out of a loaned pickup and down the dock so we could reinstall it for the return trip. R2AK is a big, closely-knit family and it was an honor to be a part of it.” 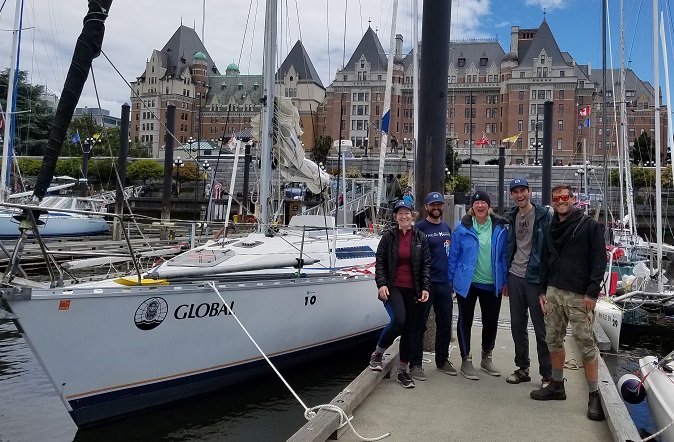