If you were obsessively tracking Global’s two teams in the Race to Alaska like we were, you know they made it all 750 miles up the Inside Passage, from Port Townsend, WA to Ketchikan, AK. If you weren’t keeping tabs on the (mis)adventures of Team Global and Team North2Alaska, we encourage you to look back through their Facebook pages, and check out our previous blog posts: R2AK: Our Favorite Kind of Crazy;  Global Employees Ready for Rugged Race to Alaska; and R2AK Stage 2: Global’s Racers Weather the Storm.

The Race to Alaska (R2AK) is a tough, cold, unpredictable, incredibly challenging endurance race — the longest race in the world of its kind. At Global, we love a good challenge. It’s why we do what we do. It’s also why we’re a sponsor of this year’s R2AK. But as much as we love challenges, even Global’s CEO Devon Grennan says actually racing in R2AK seems a little out of his league; play the video to hear his comments on the race, the teams, and why Global hires people like Katy Stewart, Marine Casualty Project Coordinator, and Malachi Church, Environmental Technician.

Team North2Alaska finished the race in 9 days, 22 hours and 54 minutes, coming in 12th – sailing (but mostly rowing) an aluminum sharpie they built completely from scratch. “[We did it] with pure grit,” said Church. “We were sun burned. Out of water. Dwindling food supplies. It’s the best way to get to Alaska!”

Team Global finished just three hours behind North2Alaska, hitting the finish line at 10 days, 1 hour and 54 minutes, finishing in lucky #13 position after a number of setbacks along the way. In an event where nearly 50% of the teams drop out, simply finishing the race is a massive accomplishment and a testament to perseverance.

Stewart said the challenges of the race parallel the challenges of her job in marine casualty response. “Everything that we do in the casualty group is problem solving, and that’s all that race is — it’s solving all the problems that pop up until you get to Ketchikan. Weather, navigation, breaking things, temperature, hunger — they’re all just problems to solve.”

Breaking things became a serious issue when Team Global’s boom failed in heavy seas as they approached the Alaskan coast. “It was so windy, but it was this weird quiet moment. It wasn’t this big, scary noise — it just snapped and with that the wind came out of the main sail so it was quieter all of a sudden, and we’re not moving as fast,” Stewart explained. “We all kind of looked at each other — uh oh — and we sat there and talked through all of our options. What do we have that’s strong? What can we do in this weather? Then we just made a plan using what we knew we had. In a weird way, that moment of breaking things and then fixing them was the best part of the race. That realization that we could deal with it.” [To see the team in action, check out the video below.]

Stewart says the challenge is why she started doing R2AK in the first place. “I guess I got interested because I was bored,” she laughed. “It’s the challenge of it, I just totally can’t say no to that. I said last year I was feeling under-adventured, and I guess that’s still probably the case.”

Even though it’s technically a race, the competition is friendly and the teams want to see everyone make it to the finish line. There are individuals and rivalries, but there’s a spirit of camaraderie for racers past and present. “It’s a giant group of people all trying to do the same thing. It’s not really a race to anyone,” said Stewart. “The time in Victoria [after qualifying] was great. You saw all these people running around borrowing tools. I gave Team Sistership some Splash Zone and everyone is giving everyone advice about pedal drives. It really is a matter of doing whatever needs to happen to get everyone there.” 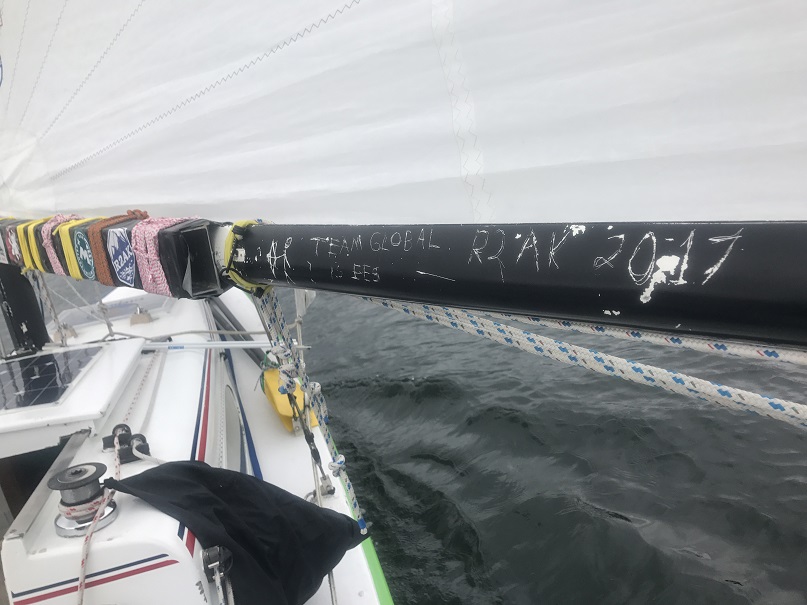