Team Global Prepares to Race to Alaska Once Again

The third time’s a charm, right? Global’s Katy Stewart, salvage specialist and captain of Team Global, is preparing for her third Race to Alaska. The race, organized by the Northwest Maritime Center, is the longest human- and wind-powered race in the US – no motors, no support, 750 miles from Port Townsend, WA to Ketchikan, AK through the Inside Passage. Last year 43 teams registered and only 27 finished the race. 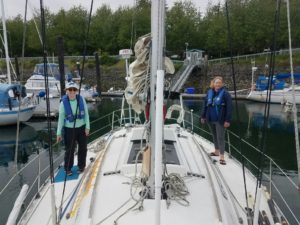 Stewart captained a trimaran in 2016 and a Columbia Sabre in 2017; this year she’s upped her game to a 34’ Beneteau First 345 sailboat named Not Bad. “I’m the Goldilocks of sailboats,” Stewart laughed. “This one’s too slow, this one’s too broken…this one’s just right! I have some concerns about rowing that much weight; it’s definitely a bigger, heavier boat than last year. It will perform better in light winds though, and it’s tough enough for when the wind kicks up – which we know it can and will do.”

Why row a sailboat? Strong currents and unpredictable winds in the Inside Passage mean the sails often need human help to move the vessel the right direction. This year Stewart will have a sliding rowing station aft and low to the water, plus two single-oar stations midships on each side. She’ll have four crewmembers with her: J Holt, radio producer and avid sailor; Malachi Rivkin, a high schooler with an affinity for kayaking and adventure; Drew Smith, sailor, wilderness EMT and R2AK veteran; and Lara Mayer, Global’s marketing communications coordinator and sailing “enthusiast”.

“Katy was looking for an additional crewmember, and I decided my life was far too uncomplicated,” laughed Mayer. “I followed the race last year; it’s amazing and inspiring what these teams overcome. Most people would never dream of attempting it; their initial reaction is, ‘I could never do something like that.’ My reaction is, ‘Why not?’ I had the opportunity to go on this incredible adventure, so I took it.”

Stewart said she’s excited about her team, none of whom have met each other before. “It’s ‘Six Degrees to Katy,’ no one knows anyone but me. It’s like some weird, high level social experiment, we’ll be united under a common bond of survival,” she said. “I’m really confident that every single one of these people are good under stress and play well with others, which was my goal.”

Stewart said team building is one of the strongest Global values that carries over to R2AK. “We rely on good teamwork, good communication and the ability to adapt to the conditions at hand. As a project manager, it’s important to recognize the strong suits of everyone on board and know how to put those strengths to use in that situation. It’s also about adapting – you might be on a project where you don’t know everyone that well or how they work, but everyone pulls together to solve the problem.”