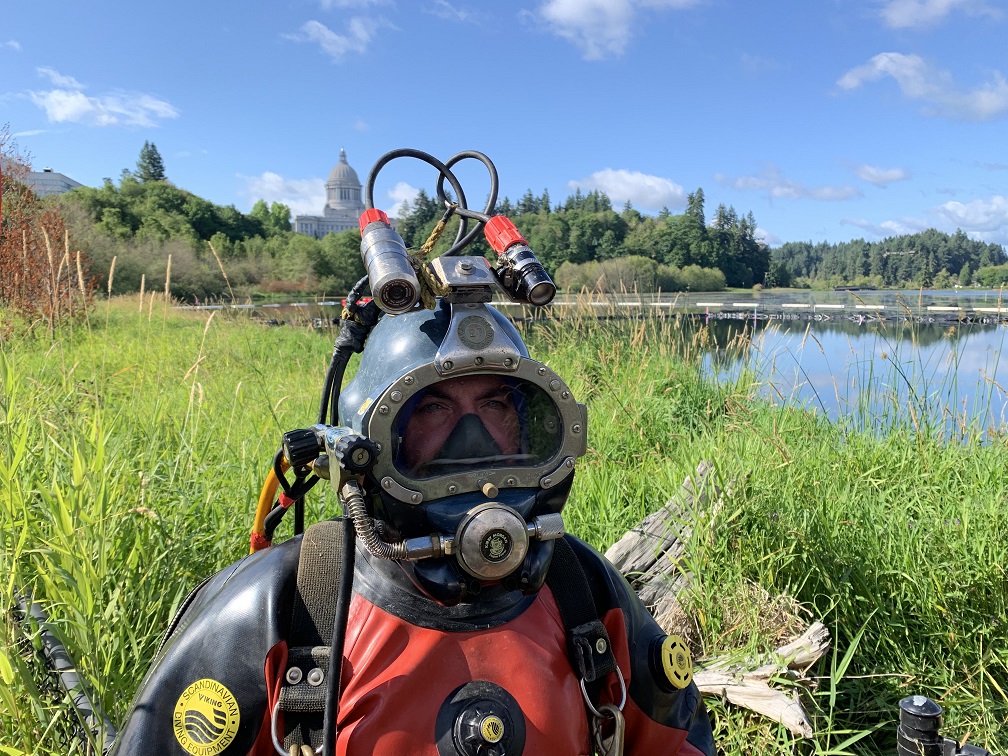 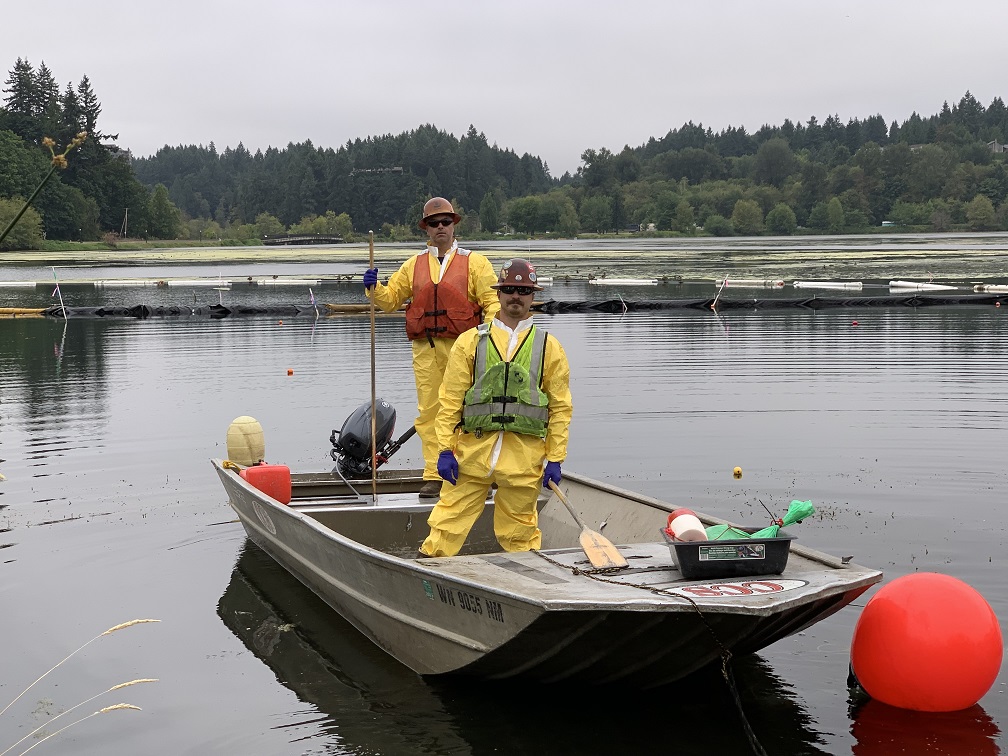 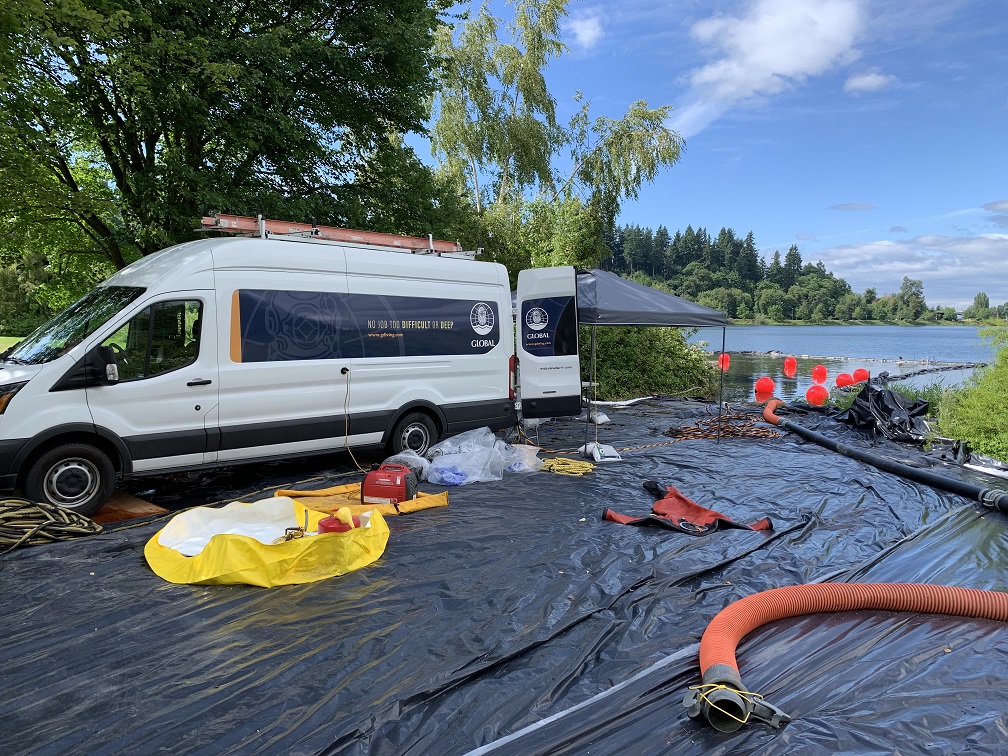 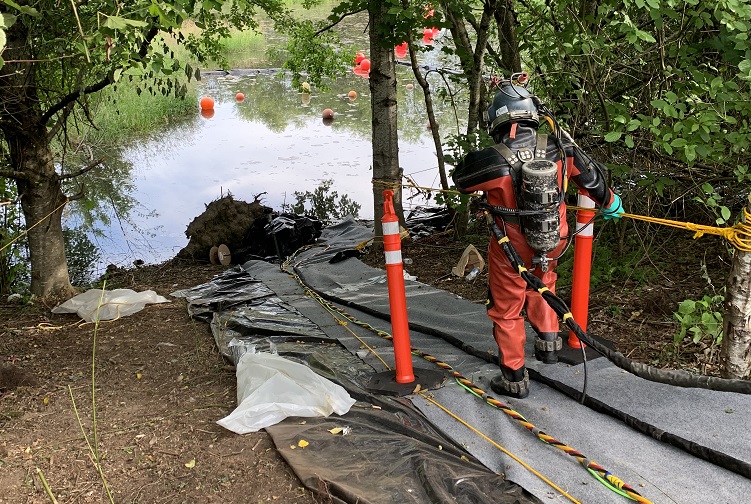 While attempting to steal copper, vagrants damaged a disused electrical transformer located within a former brewery building. This caused the release of more than 700 gallons of electrical insulating oil containing polychlorinated biphenyls (PCBs) into the adjacent Deschutes River. The oil traveled downstream into the 260-acre Capitol Lake in Olympia, contaminating the bottom sediment and shoreline areas of the lake.  The Washington Dept. of Ecology, in partnership with Environmental Partners, Inc. (EPI) identified 10 areas throughout the lake where PCB levels in the lakebed sediment were above the permissible threshold. A plan was developed utilizing divers to remove the contaminated sediment through targeted dredging, and Global was contracted to perform the work.

Divers wearing hazmat dive gear (Viking HD vulcanized rubber dry suits) utilized a 6” dredge to remove sediment within defined areas, at depths ranging from 6-inches to as much as 5-feet.  Additionally, divers assisted WA DOE & EPI in taking Ponar and sediment core samples of the cleaned areas; the performance sampling allowed the client to track the levels of PCBs within the dredged areas.

The dredge was connected to an 8” irrigation pump which sent the spoils to a “tank farm” where the sediment was separated from the water. Flocculent was added as the spoils entered the tank system to separate the sediment from the water as it passed through a series of tanks and weirs before passing through bag, activated carbon and sand filters; the clean water was then pushed back into the lake. The sediment tanks were pumped out into tanker trucks and the spoils were hauled to a landfill for proper disposal. Over the course of the project, crews put in more than 7,000 hours, removing hundreds of tons of contaminated sediment through the targeted dredging process, completing the project to the client’s satisfaction.

Site access and the lake’s proximity to the Washington Capitol Building and several popular public parks created challenges for the team to overcome. The locations of the lake where the contaminants had settled were often difficult to access from shore, and access by a boat or barge was not an option. Suitable areas for placement of the water treatment tank farm were also limited. To overcome this, 8” HDPE pipelines of up to 2,200 linear feet were constructed along the shoreline and floated throughout the lake to carry spoils from the dredging area to the tank farm. The adjacent parks remained open to the public during the dredging, including during an annual local carnival drawing more than 100,000 people, requiring extra precautions to secure the operations from spectators.

The presence of invasive species also posed a challenge during the project; Capitol Lake has been closed to public use of any kind since 2009 after the discovery of the invasive New Zealand mudsnail.  As a result, decontamination of all gear and equipment that came in contact with the water was mandatory to aid in preventing the spread of this invasive species. Equipment was decontaminated through a 3-step process; it was wiped down with diesel, followed by cleaning with Simple Green, then pressure washing with 160° F water. The equipment and gear was tested after decontamination.